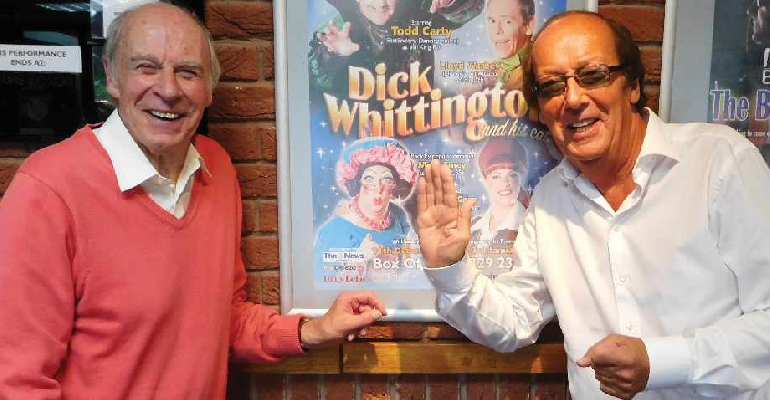 Fred Dinenage has never had a hit record but he owes his 50-year career in television to a chance meeting in the office of the Brighton Evening Argus. Meridian’s much-loved presenter was on a summer relief shift when Annie, already popular on the small screen, walked into the room. She told him a Southern Television producer was looking for a young presenter and she had given him Fred’s name.
Despite having no plans for a career in television he got the job. Well, in fact, it was a seven-week contract and he’s still there. After life with Southern and TVS he’s been at Meridian for many years. That initial chance led to Southern’s Three Go Round, with Fred, Diane Keen and Britt Allcroft.
“Diane is now a famous actor and Britt, who was always more interested in the production side of the business, got the rights to Thomas The Tank Engine and is now a multi-millionairess living in America. So out of the three of us, I am the one who didn’t really make it,” said Fred. To many people our Fred is the most famous of the trio - and How!
Fred and I go back a long way and we love a bit of fun when we get together. He was the first person to ever interview me. Recently, I teased him about a book I had back in 1980 that suggested his ambition was to retire a rich man. That brought a smile to his face. “I suppose I’ve failed on both counts. I’m still working and you don’t make a fortune out of regional television. I still love it and don’t intend to retire yet. I’ve made so many wonderful friends.” Fred reminded me of a statement our mutual friend, Brian Conley, made on television, after he’d celebrated 50 years on TV. With that Conley glint in his eye, he’d said to Fred: “It’s amazing how someone could have lasted so long on television with so little talent!”
Joking apart, Fred Dinenage is a supreme professional. Few, if any, have his natural talent for reading an autocue, or the upmarket digi-prompt as it’s now called. He can also adlib with the best of them and handle an unscripted show with ease. Life on our teatime screens is a lot tougher than it used to be.
“Our Meridian area is so big now we do three shows every night. One for both the east and west areas and another for the Thames Valley. We record two very late and do the other one live. It does work.”
Here’s a couple of secrets. Fred and Sangeeta sometimes tap each other’s knees on Meridian Tonight, to make sure who’s going next.  If Fred strokes his nose while Simon Parkin is talking about the weather, it’s his cue to quickly come to a halt. Over the years, Fred has been partnered with some talented co-presenters. Many guys have envied his working relationships with Fern Britton, Debbie Thrower, Natasha Kaplinsky, Jane Wyatt and currently Sangeeta.
“They have all been really good broadcasters and such good company. I have been so lucky.” Millions remember How with such great affection. How ran from 1966 to 1981 and became the longest running children’s television show on ITV.
How 2 ran from 1992 to 2006. The original show was created by Jack Hargreaves and Fred rated him as the best broadcaster he has ever worked with. It also gave Fred a national TV face. During his long career he once presented a number one television show. It was a Miss Great Britain beauty contest. He also presented World Of Sport on a few occasions.
“That was mainly when Dickie Davies sent his hair away to be serviced,” quipped Fred. Like all news presenters, Fred has to try and hide his sadness at some of the stories that appear
in the programme. He does admit that sometimes they go home with him. The Shoreham air disaster got to him more than almost any other. Fred has always had a personal love for the Island and has so many favourite places, particularly Yarmouth, Godshill and Cowes. He would be very happy to live here.
He said: “I do love the Royal Hotel at Ventnor. It’s old fashioned and still going strong. A bit like me really!” When Reggie Kray was in Parkhurst he was quite moved by some of the stories on Fred’s shows. He even arranged for 13 paintings from prisoners to be auctioned for a special charity. When Reggie invited Fred to visit him in prison he took the rare opportunity and ended up writing a best-selling book on the Kray twins. He also delivered a very touching eulogy at the funeral of the Island’s Wilf Pine, a family friend of the Kray family. Fred’s crime television shows are always very popular.
Fred and I have similar hairstyles and he always seems to retain a little more hair than I can. We often joke about this. I knew he would have the final word.  “Have you noticed my hair always stays brown. Isn’t that lucky John.” We both decided to leave it there.
For more of John’s interviews, go to www.johnhannam.com