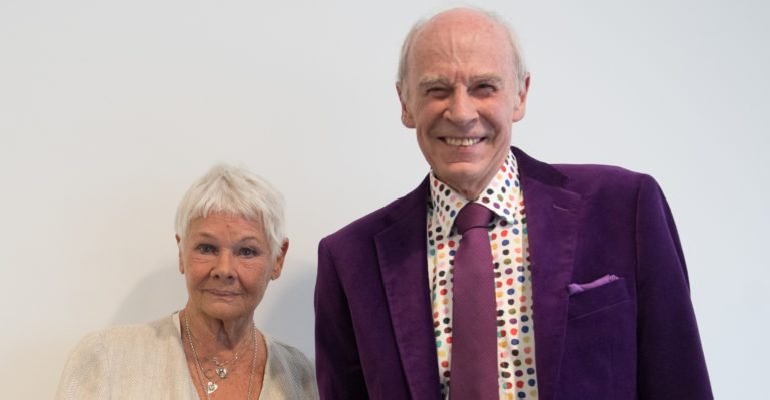 On July 7th, completely out of the blue, I received an unexpected email from a guy called Neil Chandler, the venue and artistic director of the Fairfield Halls in Croydon, which was re-opening following a £42 million redevelopment.

The date set was September 16th. Dame Judi Dench was to be the guest of the day and would I be up for interviewing her live on-stage in front of 500 people, in the Ashcroft Playhouse. I said yes straight away – and then thought what have I done. My normal interviews are in hotels, private homes or theatre dressing rooms, with just me and my guest.

In mid August I was summoned to Croydon for a 10am site meeting and was told I could bring my partner Roberta. We were invited up the previous day and provided with return rail tickets and an overnight stay in an excellent hotel. Neil, who was born on the Island, met us and took us for a meal. When we saw the far-from-finished complex we just wondered if it would even be ready for the launch day. To view it we all had hard hats, goggles, special boots and coloured jackets. It was also pouring in rain. I heard nothing for a while until just a couple of days before the event. Then my final instructions were sent to me. I was nervous and, thankfully a few close friends convinced me all would be fine.

Come the great day and we headed back to Croydon on an early morning train direct from Portsmouth. En route I had messages from Sean and Caroline to say how proud they were of dad and wishing me good luck. We had a lunch near the huge complex and it seemed right on cue when a Level 42 track was being played as we were having our meal. Island-born Mark King had just written the foreword to my new book. Then we checked in to the hotel and our room number ended in 007. The third good omen, as I was soon going to interview M from the Bond movies.

We arrived early and nothing was too much trouble. We were shown my dressing room and there was everything we could have wanted. Then we were told Dame Judi Dench might just pop in to say hello. I was still waiting for my adrenalin rush to cut in and wipe out my nerves. That happened in an instant. Our British treasure walked in and we were immediately introduced. I told her just how thrilled I was to be interviewing Dame Judi Dench. Her first words to me were: “John, just call me Judi.” Suddenly my confidence blossomed.

So what was Britain’s finest present day actress really like? She joined us and we had 30 minutes of enjoyable chat and fun. Just a lovely lady and you felt privileged to be in her company. It was just as well we are both touchy people – and this continued later on stage. Judi was just a delightful lady. Not a hint of any ego. She was even worried she would produce a whistle on stage, as she had a slight tooth problem. It never occurred.

We talked a lot about her love for the Island. She told me: “I just love the Isle of Wight and when I come over on the ferry they even let me steer the boat for a little while. Osborne House is so beautiful.”

While we chatted I was just in my casual clothes. When she came in again I had my bright purple jacket on, dress suit trousers and purple winkle pickers. Judi suffers from limited vision due to macular degeneration but she suddenly realised I had changed and began to tease me. Then she came close to look at my purple jacket. Then she got down and touched my shoes when she realised they were purple. On stage we really hit it off and Judi was in fine form. I had done a lot of research and knew several amusing stories from her life. In fun she told me I was naughty to bring some of these up but the audience loved them.

During the hour-long segment we were later joined by Michael Billington, Britain’s longest serving national theatre critic. It became a three way conversation.

I know Judi enjoyed our chat because she told me as we came off stage. She appreciated my research. The audience seemed to love it. I had forgotten London Mayor Sadiq Khan was in the audience. We met up after the show and Judi said to him: “We were on John’s show really.” I felt quietly proud when he congratulated me, after Judi and Michael, who were the big names. Then he called me into a group photograph.

Judi did reveal she has no plans to retire. That made two of us. I must congratulate our Island boy, Neil Chandler, who did such a wonderful job. He’s enjoying a marvellous career in the theatre industry. He manages to keep so calm. After the show he told me: “John I made the right choice you were brilliant. It was just like the old days and listening to one of your IW Radio interviews.” I’d been frightened of letting him down.