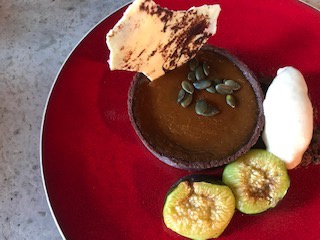 Approximately 13 million pumpkins are used in the UK for Halloween. Unfortunately most of these are only used for carving and then the flesh is discarded. What a waste!

Sadly most of it goes into general waste instead of being used for compost. With a little thought, the flesh can go a long way. It doesn’t always have a lot of flavour as they are grown for carving and can be pale and watery. You can turn them into something pretty special though, with a few spices and flavours.

This recipe for Pumpkin Pie with Chocolate Pastry is very tasty and a lovely dessert or coffee time snack. If you are really not interested in cooking and don’t have anyone to give your pumpkin flesh to, please at least make sure it finds its way on to a compost heap or into your food bin. This way it could provide food for lots of bugs and worms/slow worms as well as creating a rich soil for next year’s crops!