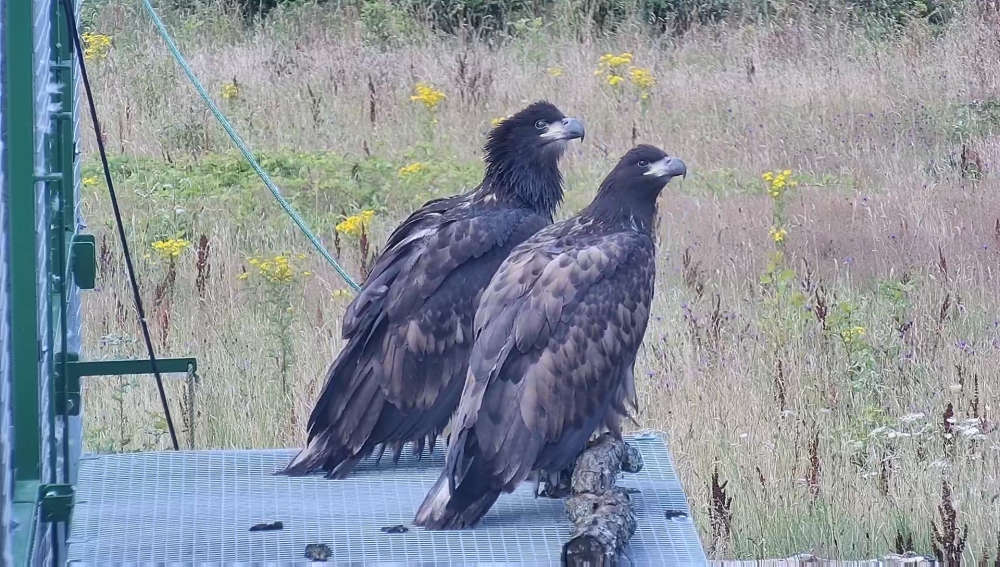 A further 12 white-tailed eagles have been released on the Isle of Wight, marking the next stage of the landmark reintroduction project.

Led by Forestry England and the Roy Dennis Wildlife Foundation the programme is closely monitoring the iconic birds as they successfully return to the English landscape.

We are pleased to report that we have released a further 12 juvenile White-tailed Eagles on the Isle of Wight in partnership with @ForestryEngland. Read more here: https://t.co/FMJTnRwVX0@SeaEagleEngland pic.twitter.com/SUoDe7HtNi

Ten of the 13 birds previously released have survived and are doing well. Evidence from similar reintroductions suggests that the rate of survival to breeding age is around 40%.

“We are now three years into this reintroduction project, and it is extremely encouraging to see just how successfully white-tailed eagles are settling into the English landscape. Highlights for me have included watching the birds learn how to successfully fish all year round and the growing interactions between the birds. I am also always fascinated in tracking some of their huge exploratory flights across England and Europe and their ultimate return back to the Isle of Wight.”

“We have seen from other reintroduction programmes that returning lost species offers real benefits for the health of our environment, and to people and local economies. None of this would be possible without the support of many people and I would like to thank everyone who has helped us again with this year’s release and ongoing monitoring of the birds.”

White-tailed eagles are Britain’s largest birds of prey with a wingspan of up to 2.5 meters and were once widespread across England until human persecution wiped them out.

The reintroduction project is bringing them back after an absence of over 240 years by releasing up to 60 birds over five years. It aims to establish an initial population of six to eight pairs with breeding activity not expected to start until 2024 at the earliest. 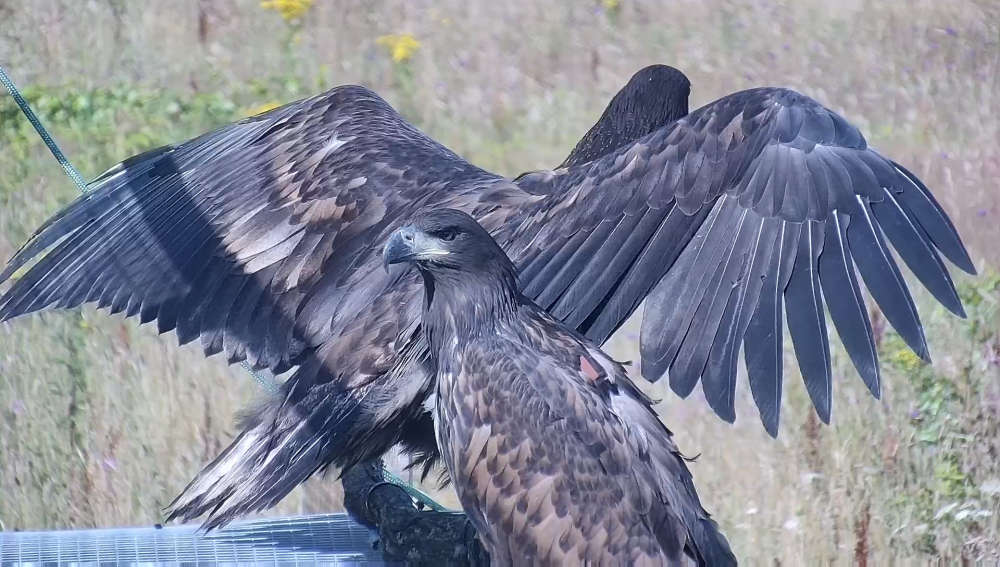 Each bird is fitted with a satellite tracker to enable the team to monitor and track their progress. Three years into the project, this data and considerable field observations are showing encouraging signs of the birds developing key skills and improving their understanding of the landscape around them.

As expected, the previously released birds have explored widely, taking many journeys across Britain as they build up their knowledge of the landscape. One bird released in 2020 crossed the English Channel earlier this year and has since spent time in France, The Netherlands, Germany and Denmark.

There have also been several sightings in southern England of white-tailed eagles from Europe, raising hopes that some of these wandering birds will pair up with those released on the Isle of Wight in years to come. Connecting white-tailed eagle populations in this way, is a key long-term aim of the project. 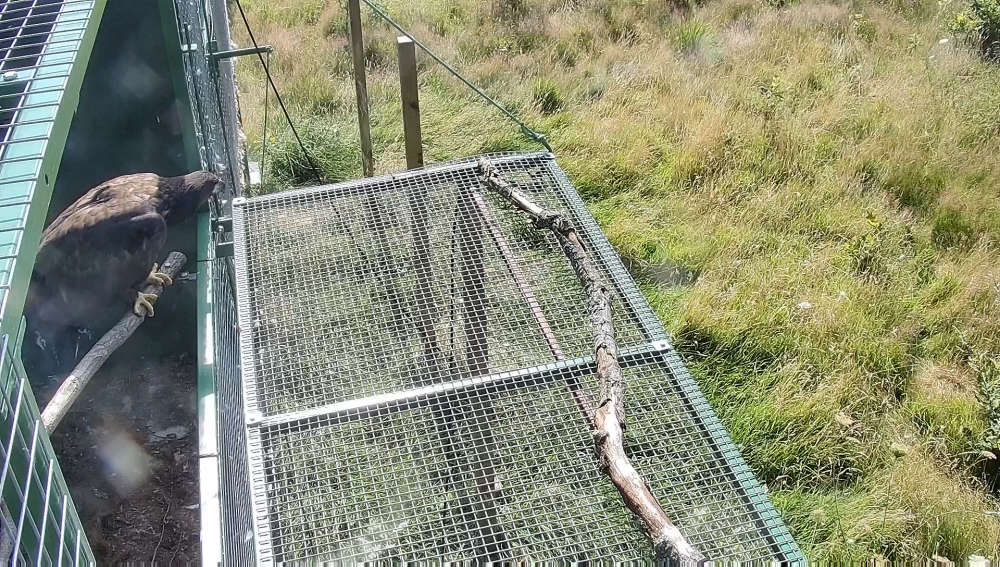 However far the birds travel, the tracking data clearly shows that the birds consistently return to the Isle of Wight, their release point. This means they see the Island and the surrounding coastline as their home and is an encouraging indicator for potential successful breeding conditions in the future.

Two birds in particular, G324 and G274 have already formed a close and lasting pairing and are showing some signs of territorial behaviours with other eagles. Whilst it too early to predict, the team are hopeful that these early signs may lead to breeding activity over the next few years.

“Over the last three years we have closely tracked the progress of these incredible birds. It’s been brilliant to see how well they are fitting into the landscape and we are hopeful that before too long they will breed in England again.”

“It’s been particularly rewarding to hear from people across the country who are delighted to have seen the birds in their local area. It’s still a real thrill for me to see these incredible birds in the skies above the Isle of Wight and I look forward to the day that they are re-established right across southern England.”

The reintroduction of white-tailed eagles is being conducted under licence from Natural England, the Government’s wildlife licensing authority. 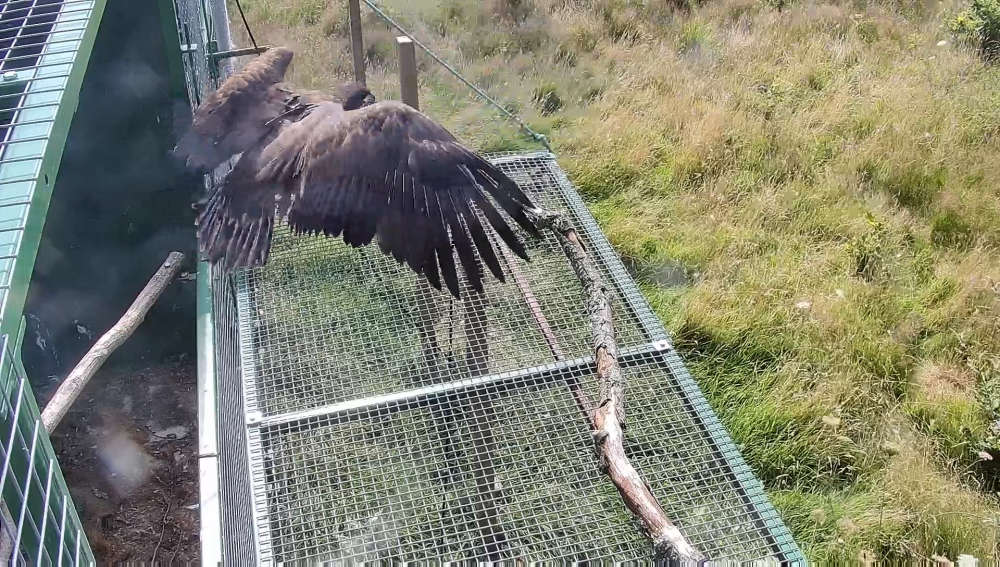 All of the young birds involved in the project are collected under a NatureScot licence from the wild in Scotland and brought to the Isle of Wight.

“Today’s release marks another important milestone on the road toward the restoration of these magnificent birds as a breeding species in England. I’m so encouraged to see this project go from strength to strength, with this third release enabling white-tailed eagles to strengthen their foothold on the Isle of Wight.”

“We will continue to work closely with Roy Dennis and his team, Forestry England and various stakeholders to ensure this project serves as a guide for further successful species reintroductions in England, which are a vital part of achieving our overarching goal for nature recovery.”

This year the project again received valuable support from pilot Graham Mountford, and his daughter, Helen, who flew a cohort of birds south from the Outer Hebrides in his plane, thereby greatly reducing the transit time for the birds. 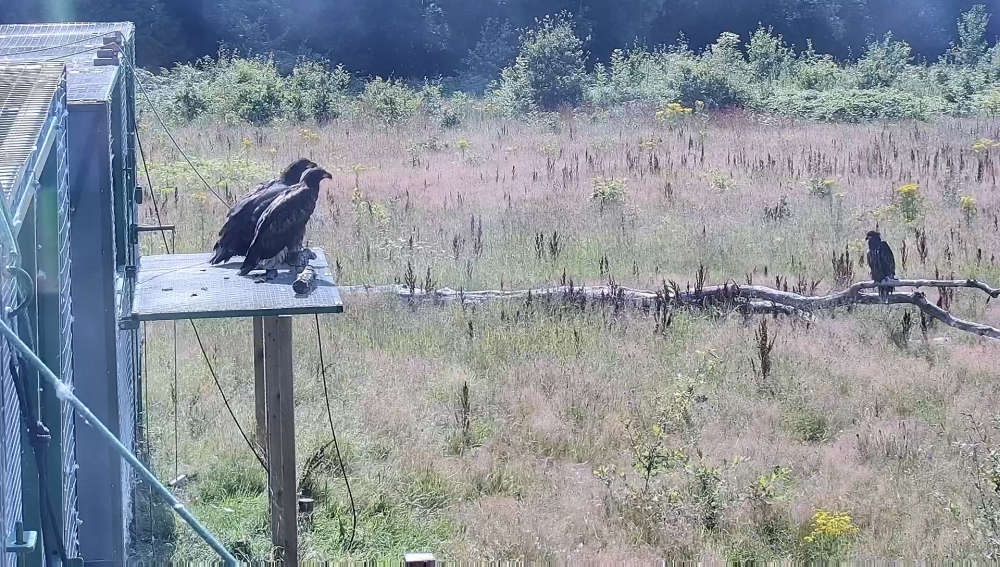 The Isle of Wight was chosen as the location to reintroduce the white-tailed eagles, also known as sea eagles, as it offers an ideal habitat for these coastal loving birds with plentiful sources of food in the surrounding waters.

It also offers a central position on the south coast allowing the birds to disperse and link with other populations in Scotland, Ireland and on the continent.