History: The Isle of Wight and the Birth of Radio 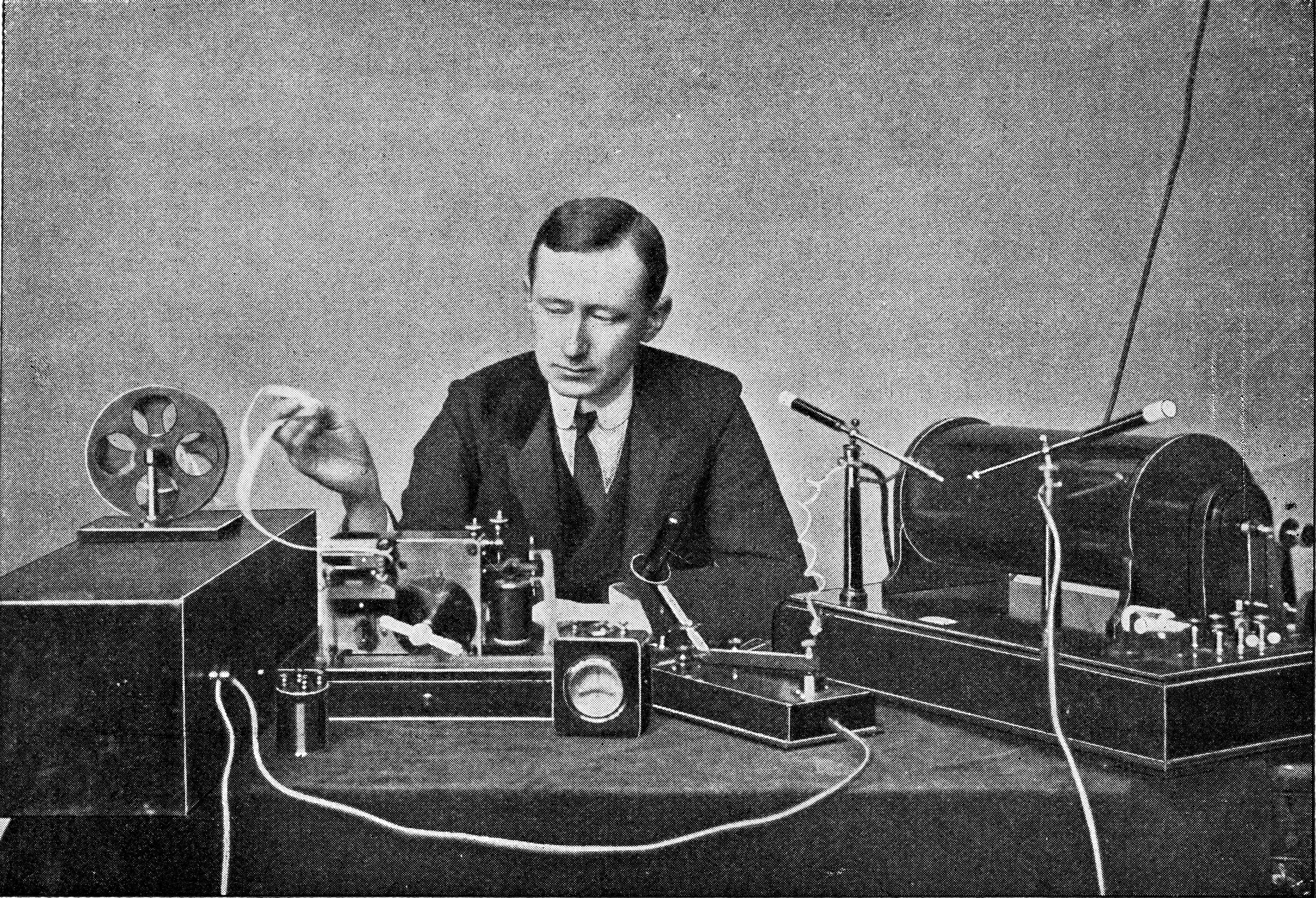 In November 1897 a twenty-three year old Italian took up rooms at the Royal Needles Hotel overlooking Alum Bay. It was just out of season and Guglielmo Marconi's proposal to experiment from the hotel over the winter was welcomed by the hotel's proprietors. For the next two and a half years the world's first permanent wireless radio station would be operated from the hotel.

In January 1901 radio transmissions from the second station at Knowles Farm, Niton, would be received 299km away. From this point of scientific achievement we can trace our world of instant global communications. Mobile phones, television, wifi, satellite communication, radio broadband and radio itself are just some of the applications developed so far.

Guglielmo Marconi was born on April 24th 1874 at Bologna, Italy. He was the second son of a "runaway" marriage between Guiseppe Marconi,  wealthy landowner, and Annie Jamieson of the Irish whiskey dynasty.

Guglielmo grew up on the family estate at Villa Griffone and in 1892 he graduated from the Technical Institute of Livorno. When his application to join the navy was rejected, young Marconi concentrated on his experiments with the spark transmitter circuit invented by Heinrich Hertz five years earlier. His father despaired but his mother supported him. "If only grown-ups understood what hard they can do children," she once explained. "They think nothing of constantly interrupting their train of thought."

Just turned twenty, Marconi started experimenting in the villa attic. In other parts of the world, other scientists were experimenting with Hertz's breakthrough with more resources and experience, but Marconi had two advantages, a fresh imagination and a useful neighbour. Augosto Righi was Professor of Physics and a world expert on electromagnetism.

The Impact of the Telegraph

Hertz had discovered the longest waves of the electromagnetic spectrum that include gamma, x-rays, visible light, infrared, ultraviolet and microwaves. When Hertz died in 1894, Professor Righi wrote his obituary. After Marconi read it he had an idea "so elementary, so simple in logic that it seemed difficult to believe that no on else had thought of putting it into practise."

Marconi's idea was to use the new Hertzian radio waves to send telegraph messages without wires.

Telegraphy, sending electronic messages along metal wires, had been theorised by the Island genius, Robert Hooke back in the seventeenth century, but it was was only after the start of the Industrial Revolution that it became practically possible. Before telegraphy was invented in 1837, the fastest means of communication was the speed of a sailing ship or a galloping horse, aided by visual signals in clear weather.

Telegraphy changed the world. Messages could now be sent and received almost instantly by the dot-dash Morse Code. In 1850 the first submarine telegraph line was laid between England and France. Over the next decades the world was linked for the first time by trans-oceanic submarine cables. In 1876 the telephone was invented eventually replacing electric blips with the human voice.

In 1894 Professor Oliver Lodge invented wireless transmission at Oxford but did not see its potential. Back in Villa Griffone that same year Marconi was managing to send radio signals a few feet across the attic. In the summer of 1895 his experiments moved into the garden and signals were picked up at ever greater distances from the house. In September a gunshot from his brother Alfonso confirmed the signal had been picked up at 2km away.

The Selling of an Idea

The Marconis took their idea to the Italian Post Office which rejected it, so in February 1896 Guglielmo and his mother arrived in London to ask the help of her well connected cousin, Henry Jamieson Davies. He introduced them to William Preece, the Engineer in Chief of the Post Office which controlled the monopoly of telegraph and telephones.

With the support of the British Post Office, Marconi's experiments progressed rapidly. In March 1897, they were able to transmit 5km across Salisbury Plain, in May 14km across the Bristol Channel and in October 54km from Bath to Salisbury. By this time Marconi had a patent and had formed a private company, so now he lost Post Office support.

It was clear that the most practical use for radio transmissions would be at sea where ships still sailed blind once out of sight of land. After a spectacular return to Italy, Marconi came to the Isle of Wight to set up the first permanent wireless station at the Royal Needles Hotel. Alum Bay was remote enough to be free of electrical interference. The working capital of the new company was used to convert the hotel's billiard room and vessels were hired and fitted with aerials and receivers. A huge mast, 168 feet high, had to be hauled up the face of Alum Bay, requiring the help of most of the able-bodied men of Totland.

Totland's sub-postmaster Mr Joseph Bartlett Garlick later recalled testing the equipment at the hotel. Asked to send a message he tapped the word 'Marconi' into the transmitter. To his surprise a moving bar at the end of the table, not visibly connected, repeated the word. "He picked up the letters on his instrument and was obviously delighted that I had chosen to send his name."

From December 6th 1897 experiments began and despite three weeks of atrocious weather, the radio signals were successfully received at a rate of four words a minute on the receiving ships. Marconi wrote to Preece to say they were often working up to their knees in water  in the rolling winter seas.

In January 1898 Marconi established another station at Bournemouth where the former Prime Minister William Ewart Gladstone was terminally ill. When snowstorms destroyed the telegraph wires Marconi offered to carry the newspaper journalists' reports via radio back to the Needles, making this the first radio news.

Experiments at the Needles continued throughout 1898 and 1899. Transmissions to ships at sea extended out to 64km. Scientists flocked to visit the "Needles Wireless Telegraph Station". In June 1898 the great scientist Lord Kelvin visited with the Second Lord Tennyson. Kelvin sent the following message to Glasgow University "Tell Blyth this is transmitted commercially through ether from Alum Bay to Bournemouth and by postal telegraph thence to Glasgow."

He insisted on paying a token shilling for each copy, making this the first commercial radio transmission.

In August Marconi was summoned to Osborne House to establish radio communication between Queen Victoria at the palace and the Prince of Wales aboard the Royal Yacht. They exchanged 150 messages and the queen was said to be "delighted".

In 1899 developments moved rapidly on new stations established on lightships and on the English east coast, the first ship to shore message, the first shipwreck rescue, the first use of the international distress signal, and the first transmissions to France.

Later that year, on November 15th 1899, Marconi was travelling back from the USA on the liner SS St Paul. While still 80km from the Island he received enough information for the Needles Station to publish the world's first newspaper  published at sea, The Transatlantic Times.

In early 1900 Marconi's company was nearly bankrupt and when the proprietor of the Royal Needles William Berkeley asked for another £1 a week in rent, Marconi started looking for somewhere cheaper. The last transmission from the Needles took place on May 26th. Then the equipment set out on an epic journey to Knowles Farm, next to St Catherine's Lighthouse where a new station was established. Marconi took up rooms at the Royal Sandrock Hotel. The owners's young daughter, Ella Green, later recalled how Marconi would take her on his knee and talk to her while sitting on the hotel lawn. Working at Niton Marconi successfully designed the first selectively tuned transmitting equipment tuning to wavelength and avoiding interference.

Orders for ship radio now started to pour in. Marconi invested another £50,000 into new radio stations at the Lizard in Cornwall, in the USA and Canada for the next great breakthrough, transmissions across the Atlantic.

There was just one last moment of glory for the Island. At 4.30pm on January 23rd 1901 the Knowles Farm station transmitted radio waves that were picked up 299km away at the new station in Cornwall, twice the distance of any previously recorded radio transmission. This proved possible what the scientific establishment thought was impossible, that radio waves would follow the curvature of the Earth. 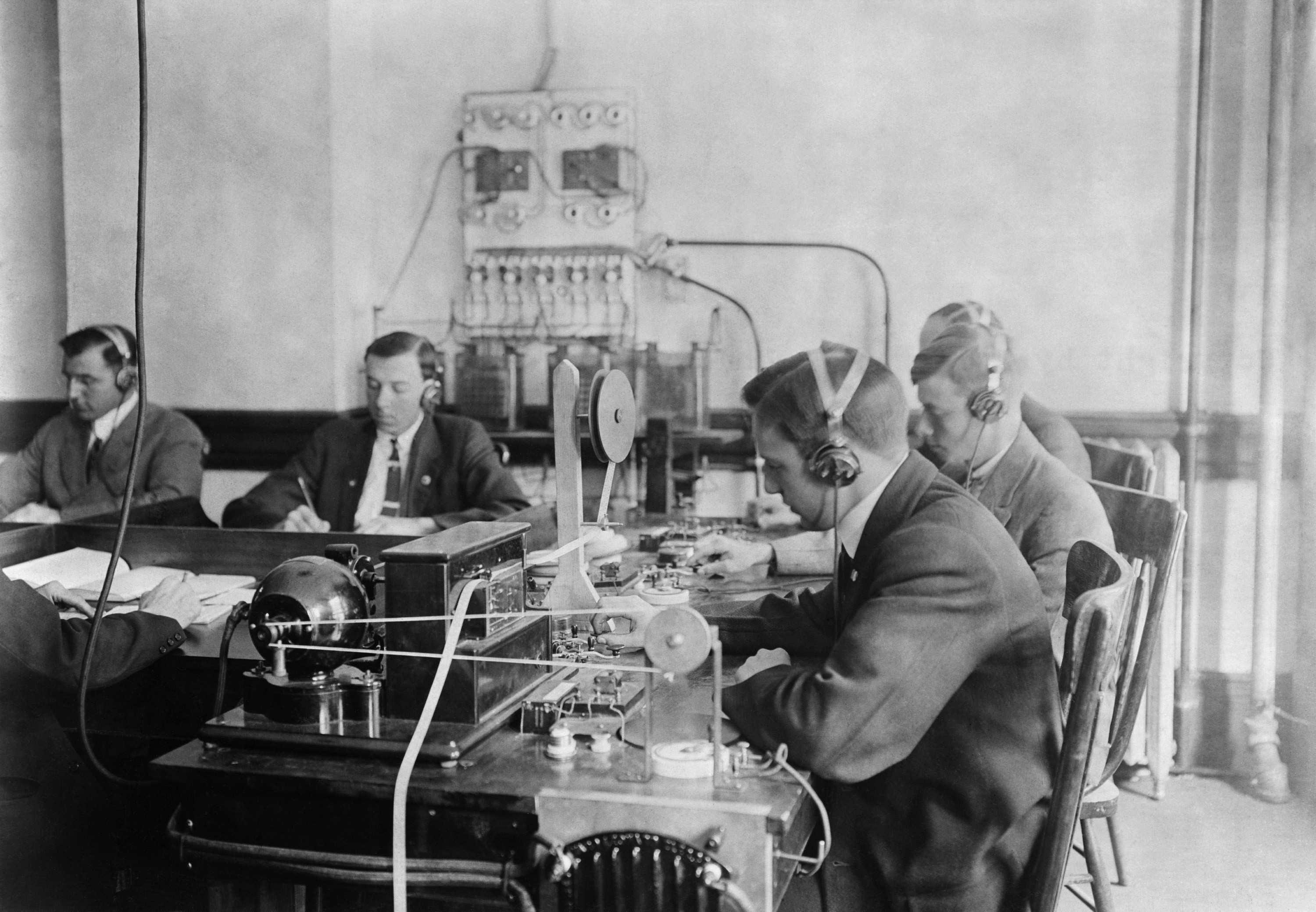 The Age of Radio

On December 12th that same year, the first successful transatlantic transmission took place in Canada. The Age of Radio had arrived. Within a decade over 500 stations had been built establishing radio communication worldwide. Marconi's British based company finally started making a profit in 1903 and has prospered since, it now employs 48,000 people worldwide.

Marconi continued experimenting and inventing for the rest of his life. In 1902 he invented the standard wireless receiver. In 1905 he invented the horizontal directional aerial and in 1906 his work contributed to the first radio voice transmissions.

In 1909 he received the Nobel Prize for Physics. Following the First World War 1914-1918 he worked  on short wave, first predicted Radar in 1922, then invented the beam system for long distance communication, invented a microwave radio-telephone, the microwave radio beacon and continued to work with microwaves until his death in 1937 age 63. Luckily he avoided by three years the war between Britain and Italy (1940-1943) which would have surely broken his heart. 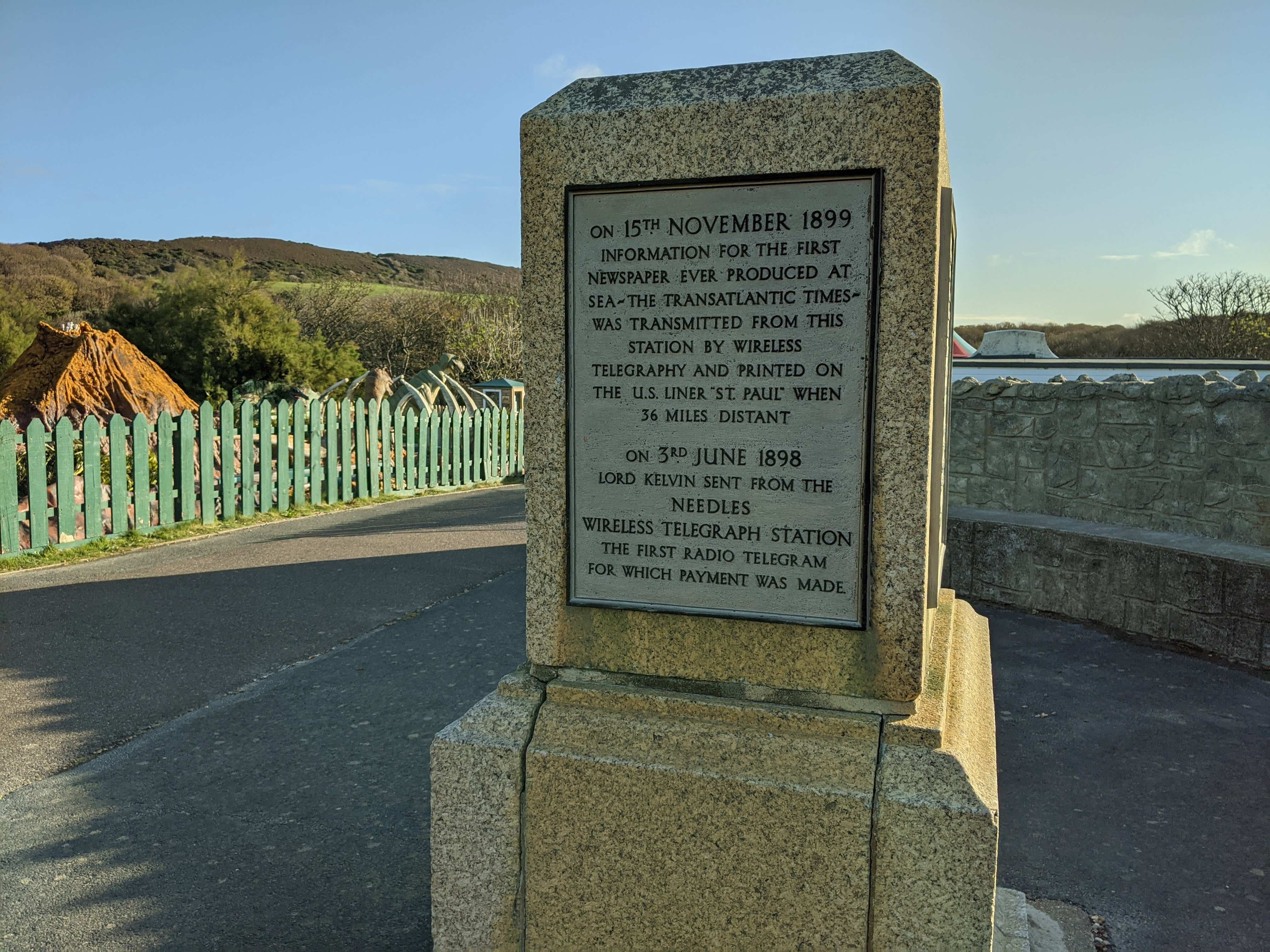 There is little to remind us of his time here now. The Royal Needles burned to the ground in 1909 and even the site has passed over the cliff. The Royal Sandrock burned down in 1984. There are just memorial plaques at Knowles Farm and the Needles Pleasure Park and the farm itself. However when you next watch TV, listen to radio, use your mobile, reheat some food, use a wireless computer, you can remember his creation is all around you and running though you, on the invisible seas of electromagnetic waves.
.....................
Additional note: The great pioneer is also remembered at Marconi's Licensed Tea Rooms, which can be found at The Needles Landmark Attraction.