The Cowes Floating Bridge: Since 1859 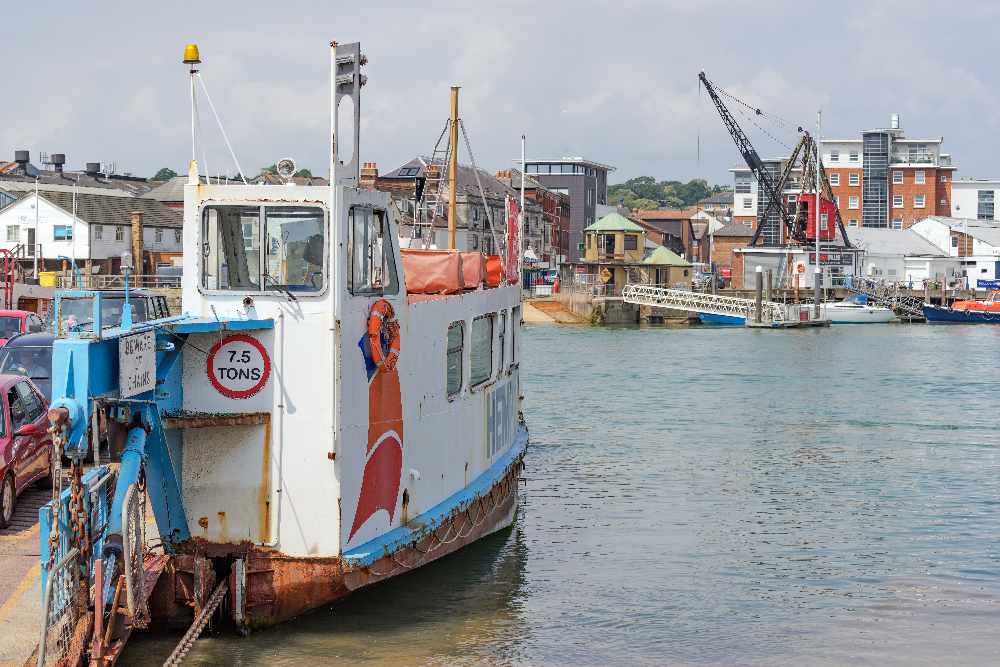 Cowes Floating Bridge has been a hot topic of late, so we've searched our archives to bring you this great history piece, by John Medland, which delves into the life and times of the Floating Bridge and its many predecessors.

The Cowes Floating Bridge is one of the idiosyncrasies of the Isle of Wight, a particularly odd and innovative approach to marine transport. Every few minutes, a tiny ferry would claw itself along clanking chains from one side of the mouth of the Medina to the other. The juddering journey was enlivened by artwork and poetry in the passenger lounges and through the windows the views of the former riverside docklands and yacht-thronged outer harbour.

The current floating bridge and its predecessors have been making this same journey since 1859. It may be a technological oddity but few forms of transport in the modern industrial era can claim to have operated, essentially unchanged for over 150 years.

For this Island Story, I am indebted to an article 'Fettered Ferry' written by T.C. Hudson first published in 1975.

Since the time of the Saxons, the lowest possible crossing of the River Medina was at Coppins Bridge, then known as 'Durneford' or the 'hidden ford'. This name implies it was then a deep and dangerous crossing. By the time the Norman port of Newport was laid out in the Twelfth Century, a bridge was probably established.

In the 1860s, a retractable railway bridge was built over Newport Harbour, now the permanent road-bridge of the Parkhurst-Coppins Bridge bypass. Since then, for the northern third of the Island the only direct alternative east-west connection has been the floating chain bridge between the twin towns of Cowes and East Cowes.

The narrow c.100m gap between the twin settlements at the mouth of the Medina has probably always had ferrymen since the sea invaded the Solent River valley after the last Ice Age. For most of our 8,000 year history as an Island, the end of the Medina was a Solent backwater. However in the 17th and 18th centuries the fishing and ferrying settlements on either side of the river grew from the transatlantic trade into the second greatest conurbation on the Island after Newport. 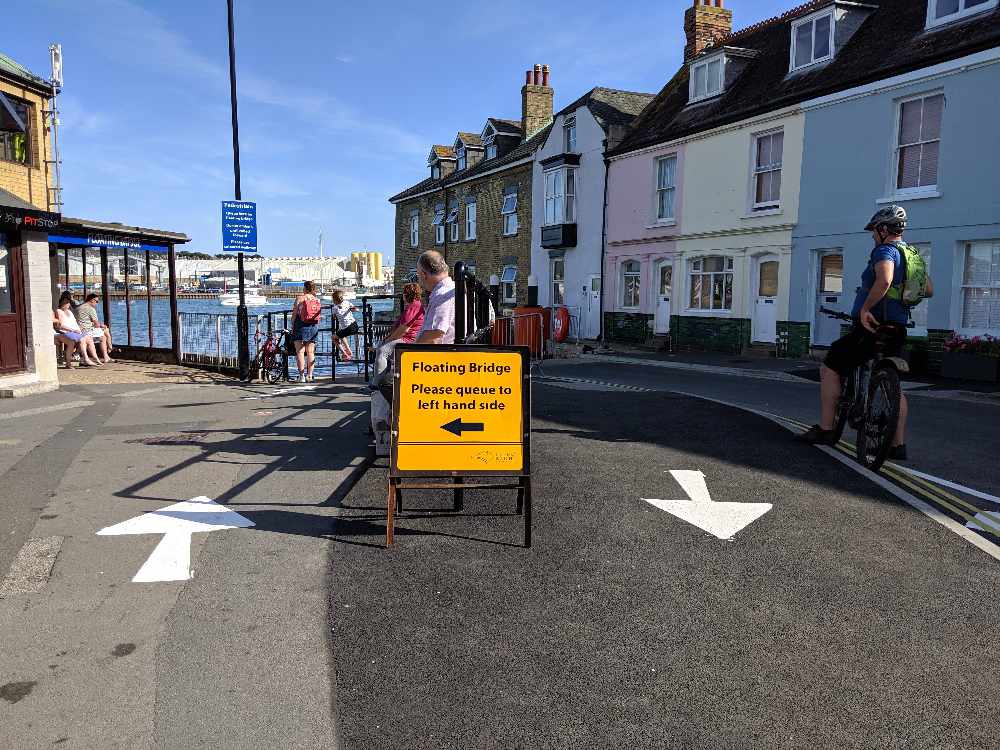 The narrow c.100m gap between Cowes and East Cowes

Based on commerce and ship-building the twin towns of Cowes were economically linked by the Medina waterway. “Contained in Harry Guy's biography 'Memories of a Cowes-born lad', there is reference to horse-boats for vehicles and rowing-boats for pedestrians – these being (he claimed) the monopoly of the Hollis family.” Miss K.M. Hollis wrote notes for the 1975 article recalling her grandfather Henry Hollis, “who could remember when Queen Victoria resided at Norris Castle and who often helped the Royal Family's nurse to put her young charges aboard the boat which plied between Cowes and East Cowes.”

The earliest literary reference to a ferry crossing was recalled in Uffa Fox's book 'Joys of Life'. He recalled an old tale that the Governor of the Isle of Wight had bet a wager that he could ride around the whole of the Island on horseback without dismounting. He was assisted in this plan by Mr John Roberton of East Cowes who lashed together two boats stern to stern. The Governor's horse was persuaded to put its fore-feet in one of the boats “and its hind legs in the other. The boats were then rowed across the river with the rider still in the saddle.” John Roberton was rewarded with the first known ferry nights.

According to the website www.simplonpc.co.uk/cowes.html the Roberton family owned the ferry rights from 1720 to 1859. From 1842, a pontoon was used to transport carts, animals and freight. The pontoon “was winced across under horsepower.”

In 1859 John Roberton sold his ferry rights to the Floating Bridge Company in return for a pension. A clerk of Bannister's Rope Works annually collected a certificate from the Reverend Prothero “to confirm that the pensioner was still alive.”

By the beginning of the Island's first great industrial boom of 1850-1875 any idea of a new bridge to link the growing towns of East and West Cowes was impractical due to the need for free navigation into inner Cowes Harbour and to the central commercial centre of Newport Harbour. The Island's bulk imports, particularly its coal, essential for its growing steam railway network and the hearths of the thousands of new town houses in the burgeoning new seaside towns and numerous steam engines was unloaded at the top of Arctic Road. The waterway also had to be open to allow the export of Newport's food exports, the cement shipments from the great works at the end of Stag Lane and the great vessels constructed in the Whites' shipyards of Cowes. The chain ferry was the only solution flexible enough to allow the passage of deep draft vessels and yet maintain a fixed link.

The first steam powered floating bridge was built by Messrs Hodgkinson & Co. of Southampton on the River Itchin. The service started on 24th November 1859. In 1868, in the recession caused by the credit crash of 1867, the Floating Bridge Company was sold to the Southampton and Isle of Wight Steampacket Company, better known to us as Red Funnel. In 1882 the company bought a new ferry from Napier & Son of Southampton.

In 1896 the company purchased the third floating ferry. This was built locally of Lomore iron by Messrs. William White & Co. There were now two ferries and this would remain the pattern until 1982. This allowed the main ferry to be withdrawn for frequent maintenance and repairs.

According to T.C. Hudson: “It is recorded that Queen Victoria, having been kept waiting, requested the local councils to acquire the rights and thus control the ferry. In 1901 an Act of Parliament enabled this to be effected.”

In 1901, the West and East Cowes Urban District Councils took over the chain ferry service. The Cowes Councils ordered a new ferry from William White & Co in 1909 and the 1882 ferry was scrapped. Its relatively new boiler was transplanted into the 1896 floating bridge.

The new 1909 bridge was named Bridge No.1, ignoring the three previous bridges. Bridge No.1 was built of steel, had power ramps and electric lighting. As the condition of the old 1896 bridge deteriorated it came to be used for only two weeks a year, becoming locally known as the 'Winter Bridge'. 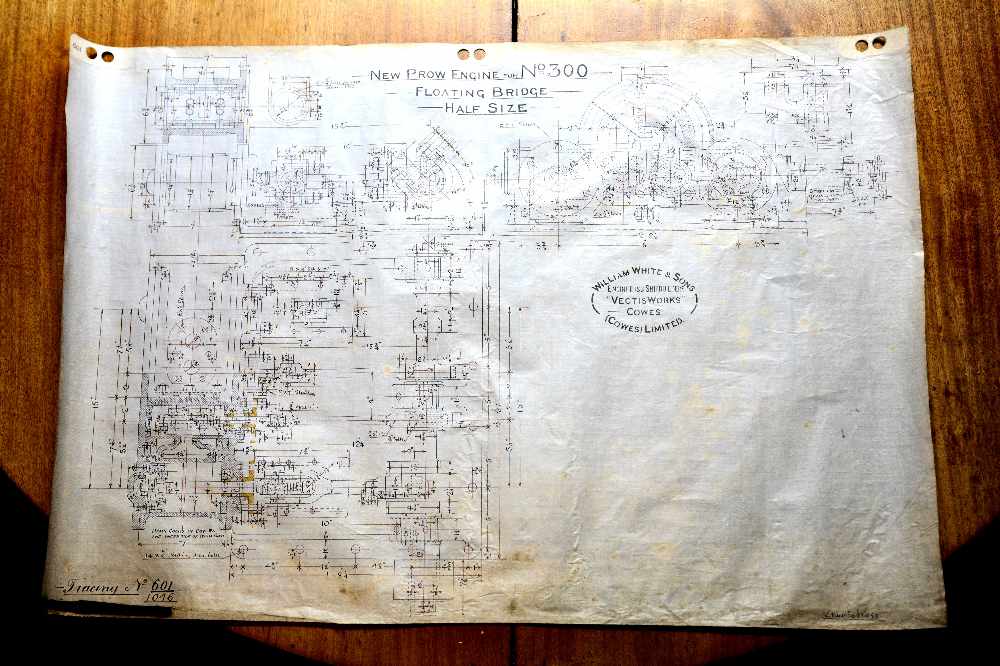 An original drawing of the prow mechanism

In 1925, Bridge No.2 was built by J.S. Whites. It was was over 100 feet long and could carry up to eight cars. This was the last steam-powered bridge.

The 1896 Winter Bridge replaced in 1925 was acquired by the Cowes sailor and inventor, Uffa Fox. He adapted it for use as an offshore home and workshop, ideal for his eccentric lifestyle. “His drawing office occupying what was the engine room, and the former boiler room being used as a spare bedroom and bathroom. A door from Empress Eugenie's yacht (Eugenie was the consort of Emperor Napoleon III of France: 1850-1870) was fitted to separate the drawing office from the workshop. Tanks collected rainwater which was used for all purposes. With his living accommodation panelled in light oak, Uffa was able to live in conditions he considered to be ideal. He could work at all hours and, by stepping ashore, he could use his twelve bore (shotgun) while enjoying the rural beauty of his surroundings – and of course he paid no rates. When pestered by tax demands, Uffa so confused H.M's collectors by moving his floating home into different parishes (ie. Whippingham, East Cowes, Northwood and Cowes) that in the end he paid nothing.”

The 1936 Bridge No.3 was the first to be diesel-electric powered. All machinery was located below the car deck level, releasing more space for passengers. She was again built by J.S. Whites in East Cowes. 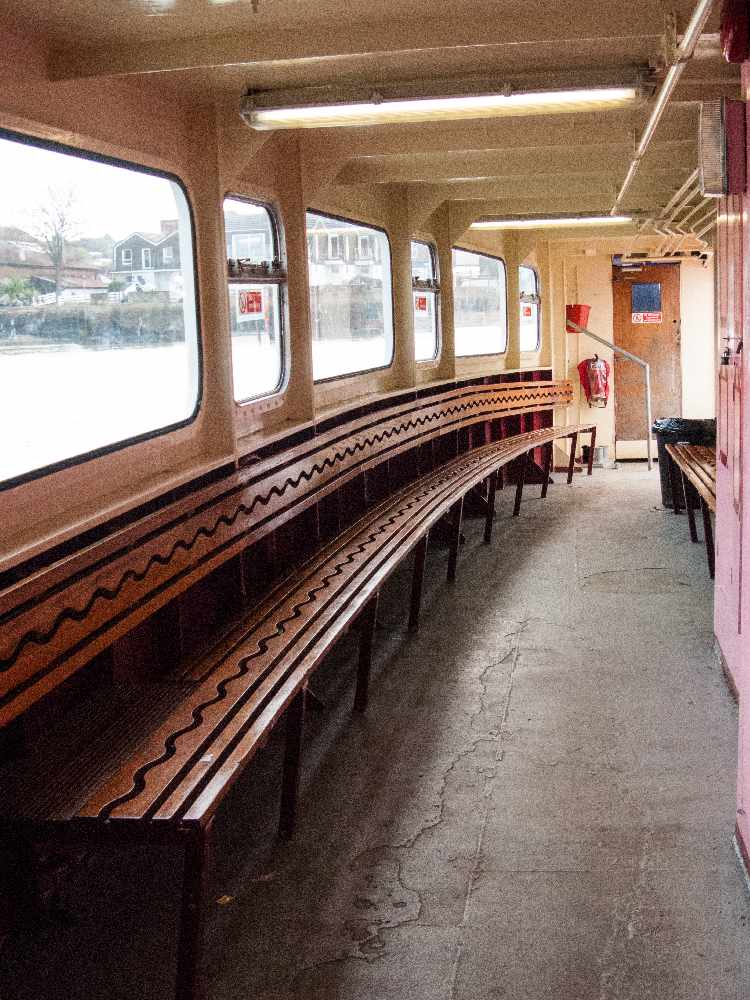 The passenger seating lounge in Bridge No.5

In 1972 preceding the Local Government Act of 1974 which abolished the Cowes and East Cowes Urban District Councils, ownership of the floating bridge was transferred to the Isle of Wight Council. In 1992 the IW Council abolished the charge for foot passengers.

Bridge No.5 was built by Fairey Marine of East Cowes in 1975. It was diesel-hydraulic powered and could carry 19 cars. T.C. Hudson was able to obtain the following plans for the new bridge for his 1975 article: 110 feet long by 42 feet wide with a deadweight of 65 tons and with a draught of just four and a half feet.

The main engines operating at 150 revolutions per minute operated the hydraulic pumps and the electricity for two generators. The powered two four-cyclinder diesel engines that provided the power for propulsion along the chains. In 1982, Bridge No.4 was withdrawn. As the sole ferry on the route, Bridge No.5 overtook the working days of all previous bridges within 10 years.

As T.C. Hudson pointed out in 1975, there is high cost of wear and tear “operating between 5.30am and 11.20pm, making an average of 220 crossings a day, it is inevitable that so much starting and stopping will result in costly maintenance. The life of a pair of chains, for instance, is only three years.”

When the bridge was out of service, vehicles were obliged to go via Coppins Bridge but passengers can enjoy a surrogate boat trip.

Bridge No.5 had been in service (at the time of writing this article in 2012) for 37 years. It long outlived all of its predecessors which served totals of 11 to 30 years, normally in tandem with their predecessors and successors.

My thanks to the IW History Centre website which publishes the article 'Cowes', concerning the floating bridge and pier. For more information about the history of the floating bridge, the best place is the East Cowes Heritage Centre. They have published a book 'Discovering the Floating Bridge at Cowes'.

John Medland's book 'Making of the Wight' is available from bookshops.