The Changing Face of Newport Quay 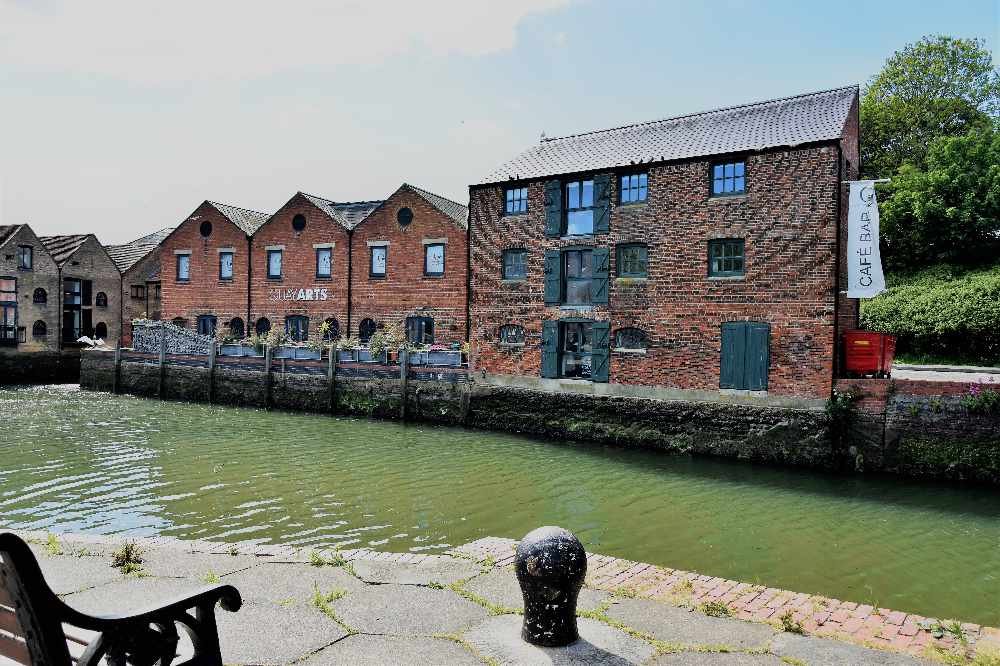 One place most of us are familiar with is Newport Quay. Perhaps we use the Quay Arts Centre or the Riverside Centre, meet at the Bargeman's or just saunter along the peaceful waterside.

It is extraordinary to think of the changes of this familiar environment since our human ancestors first came here, long before this was even an Island. From grassland to a forest lake clearing it evolved into a busy ancient trade route and medieval harbour. Later it became one of the most industrial landscapes on the Island. In the last forty years it has been transformed again into the Island's cultural centre.

After the last Ice Age ended about 12,000 years ago, the first human hunter families followed herds of hardy herbivores over the new grasslands of what is now the Channel. As the millennia passed the valleys of the Seine-Solent river systems were increasingly flooded by rising sea levels. What is now Newport Harbour was formed when the incoming sea flooded the deep river valley carved out by the confluence of the River Medina and the powerful Lukely Brook, creating a large tidal lake. We can still imagine the pre-tidal landscape in miniature where the two branches of the Lukely meet at Town Gate Pond.

Over the millennia from around 12,000 years to about 7,000 years ago the climate changed from arctic tundra, to grassland, coniferous forest and finally thick deciduous forest. Like all such waterways the Medina would have attracted many migrating birds and all local creatures seeking a drink.

Today's ducks and swans are a reminder of what must have been a cornucopia of wildlife. Humans would have fished, hunted and settled here from the earliest times.

From around 5,500 years ago the Island's Stone Age ancestors cleared much of the fertile southern vale and chalk highlands for agriculture. The heavy clays of the north continued to be dominated by thick forest. This formed a barrier to trade. Trade became critical with the rise of metal technologies. The Island has no metal deposits. Bronze and later iron for making tools, weapons and money had to be imported. This meant the Island needed to export its agricultural surplus. The Medina Valley cut through the middle of the barrier of the central chalk ridge and provided an easy passage to the Solent.

Over the millennia the Island's drowned river valleys slowly silted up with the deposits of every high tide. This means that in earlier times the ancient Island harbours were larger, longer and deeper than they are today. Some ancient harbours like Thorley, Sandown and Gurnard have completely disappeared. The medieval port of Brading is now a mile or two from Sandown Bay and Bembridge Harbour.

The original size of Newport's tidal lake can still be seen in the dead flat area around the modern river. The original upper slopes of the original river valley can still be walked down the lower High and Pyle Streets and Snooks Hill and Barton Road, leading to Coppins Bridge roundabout (which would have been entirely under water) and Hillside and Quay Street running down to the present quay.

Some idea of the depth of the River Medina can be imagined from the Old English name for Coppin's Bridge. It was called "Durneford" or "the hidden ford". This suggests that this was a deep and dangerous crossing. The main crossing point in the time of the Jutish Kingdon (530-686AD) seems to have been at Blackwater or "Horringford" some two miles upriver. The intervening crossing at Shide was originally a removable wooden walkway. Shide comes from the Old English 'scid' which means "plank". The fact that they did not build a bridge suggests the crossing was still used for the passage of river vessels.

At the time of Domesday, in 1086, Shide, with manor settlements on each side of the estuary, seems to have been the first major settlement for a vessel travelling upriver. This suggests Shide was the 'old port' from which 'New port' takes its name. However Shide was inevitably silting up.

In 1086 the fast running waters of the Medina and Lukely powered a series of watermills that ground the grain of the farmland in the fertile south of the Island. Where these waters met at the future Newport Quay the natural harbour allowed clinker build ships to be loaded with southern products. They sailed and rowed the Medina estuary on the rising and falling tide.

The Norman borough town of Newport was built in the twelfth century by order of the De Redvers family who ruled the Wight from 1101 to 1293. A major stimulus for Newport was the construction of the keep and curtain walls of Carisbrooke Castle and the new stone churches of Carisbrooke and Newport. This huge building programme required a massive importation of stone in great lumps throughout the 1100s. Behind the necessary quay the planned new port town was laid out on a grid pattern with wide spaced streets accommodating four markets. Newport was chartered as a self-ruling Borough, its free burghers annually electing a reeve, later mayor, to represent the town to their lordship at the castle.

Most of the town centre street plan has remained basically the same. Three of the market sites survive in St James and St Thomas' Square and the bulging width of Quay Street. The fourth is now occupied by the Guildhall and the section from Watchbell Lane to Holyrood Street.

In the Middle Ages, the harbour would have still been large enough for the shallow draft sailing ships of the time, designed to sit on the mud at low tide. An example is recalled in Newport's medieval coat of arms.

By the Sixteenth Century most of the old harbour would have been an expanse of silt at low tide, probably fringed with banks of reeds that could be harvested to thatch the cottages of the growing market-garden town. The marshy wetlands were then known as the Woas or Oase (ooze). By 1559 there was a footbridge from the town over the Medina to the marsh that had been reclaimedby an earth embankment on the eastern side of the present quay. This area was used as one of the town's three dumping grounds. In 1567 Richard James paid the Borough 4d rent for the area and in 1584 was ordered to plant a hedge to mark it off from the next field 'Quay Close'. On the northern side of the Lukely Brook land was reclaimed which became Little London.

The fact that Newport Harbour was getting silted up might help to explain the emergence of a new 'Newport Harbour' at the mouth of the Medina which began to develop rapidly in the Seventeenth Century. To us it is better known as Cowes. Then Newport Borough included the Medina estuary and harbour. In the 1620s the leading Newport merchant Robert Newland built and launched ships at East Cowes for the booming transatlantic trade. As Cowes mushroomed Newport harbour declined.

In 1703 a tidal mill was built on the old dumping ground. A bank of wooden stakes and clay enclosed much of the meadow to form a tidal pool which gathered the high tide to power the mill. This was one of a number of tidal mills built in the Eighteenth Century when agricultural prices were rising. There were guaranteed markets for flour for the thousands of red-coated soilders camped between Newport and Parkhurst Forest and tens of thousands of mariners who passed through the Spithead. The lower Medina tidal mills were nicknamed after Australian convict colonies. Good examples of tidal mills remain at St Helens and Yarmouth.

By 1793 the mill at Newport Quay had disappeared. For another fifty years the embankment remained as a right of way as the former millpond once again became a marshy meadow where horses could be seen frolicking.

From the late 1830s Newport Quay experienced the industrial revolution. The ancient town borough was replaced by a new businesslike town corporation. In 1851 the new council invested £15,000 in dredging the river and straightening its banks with stone walls. In 1862 Newport Railway Station was built just north of Little London. By 1875 the line was exended to Ryde. It crossed Newport Quay on a bridge that could be retracted to allow the passage of the sailing barges that supplied the now thriving Victorian port.

Connection by sea and rail encouraged the spread of brick warehouses to the uppermost reaches of the incoming tide towards Coppin's Bridge and Town Gate Pond. The industrial landscape along the lower Lukely was dominated by the huge Mews Langton Brewery suffusing the town's sooty air with the smell of malting. What is now the Quay Arts was a warehouse for the brewery known as the Porter Store. The Island beers were stored on the ground floor while spirits were stored upstairs.

The site of the old tide mill was redeveloped as a gasworks. The site took in the adjoining Quay Close. In the 1960s the rising and falling gasometer dominated the Newport skyline. I recall it and the tower of St Thomas' as the only objects rising out of the flat sea of milky smog looking down from Horsebridge Hill. With the arrival of the North Sea gas the town gasworks was closed. In the 1960s Newport docks was overwhelmed by roll-on roll-off car ferries. Lorries bypassed Newport Railway Station which closed in 1966. 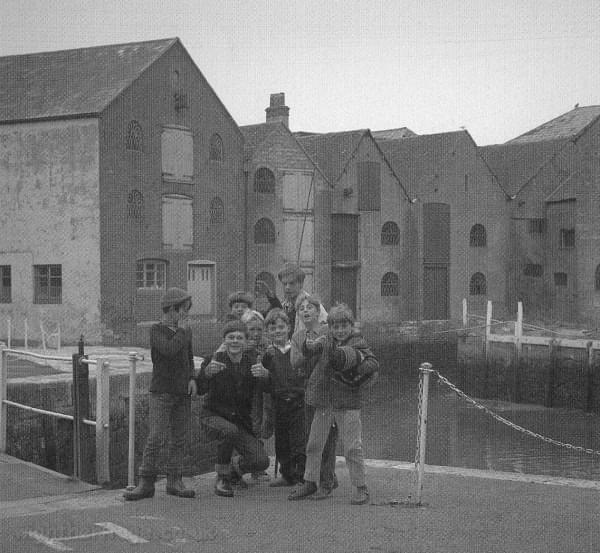 A group of lads on Newport Quay in the 1960s

Christine West was keen to raise funds for the Arts Centre. One art auction at the West's home in Bembridge raised £4,000. Work began on the building by friends and members of Quay Arts and workers from the Manpower Services Commission. The first event was a one-day show where local artists were invited to turn up and sell their work.

Thirty-five years on Quay Arts has become the Island's leading arts and cultural centre. In the same period the Riverside Centre founded in 1981 across the quay developed to become a vital social centre for all kinds of people with additional needs, a meeting point for charities and non-governmental organisations. The quay has also become home to the Isle of Wight Bus Museum and the Boat Museum.

With thanks to the IW History Centre and Quay Arts websites and A.D. Mills book on Island placenames.