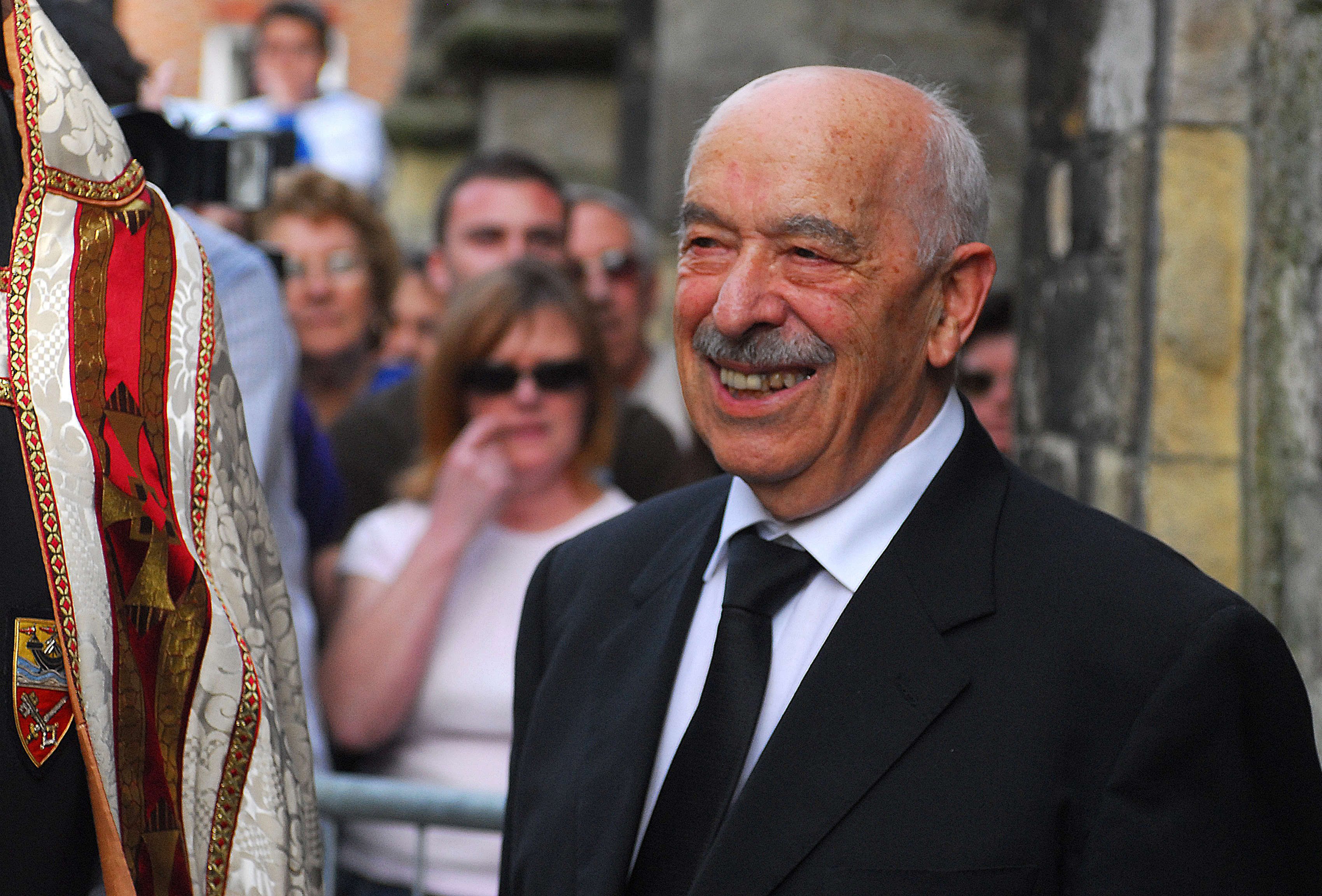 The founder of the world-renowned Minghella ice-cream, Edward Minghella, celebrated his 100th birthday on June 21st.

Over the last eight decades living on the Island, he has worked for countless charities and promoted civic causes.

His many achievements include him being made a Freeman of Ryde five years ago while he was a former Deputy Mayor of Ryde and is a Life President of the Chamber of Commerce.

Edward, was born in Coatbridge, Glasgow in 1921. His mother was British born (but of Italian heritage), and his father, Antonio, hailed from Cassino in southern Italy.

He was the eldest of four children. The young family moved from Glasgow to Paris, where Edward's father was an electrician. However, in 1926 Antonio died of a mysterious fever, leaving his wife with no income and four mouths to feed. In desperation, she turned to the care of relatives in Italy.

Here, Edward shone at elementary school, winning a scholarship to secondary school worth 25 lire, which would pay for shoes and uniform. But the family was hungry, so Edward had to collect the money, but it went towards food, not uniform, and he was sent to work in the fields, helping a farmer tend buffalos. 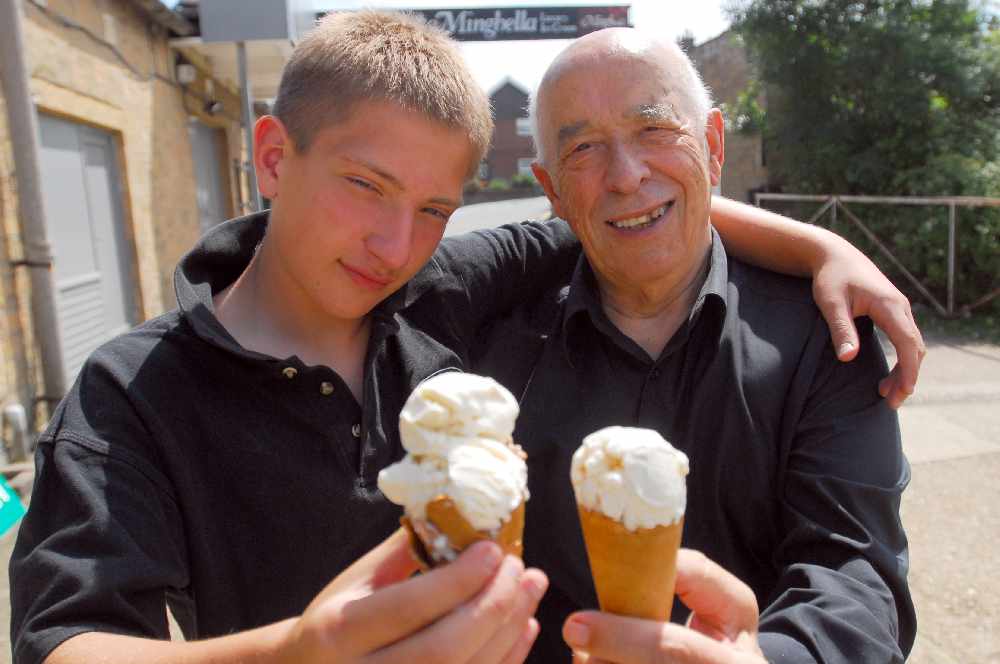 His schooling had ended with only three years of elementary school. Hunger remains a recurring theme when he recalls those years.

Just as the war was beginning, Edward and his younger brother, Vic, being British born, were invited back to the UK to work in an ice cream factory in Portsmouth.

Edward spoke mostly Italian, with a smattering of French from his early years, but as a British subject, he was called up joining the Royal Army Medical Corps.

After the War, he returned to Portsmouth and found himself chaperoning his boss's son, who was 'courting' a girl in Ryde. The girl, too, had a chaperone - her sister, Gloria.

And it was the two chaperones who fell in love with the couple marrying in St Mary's Church, Ryde when he was just 19.

Edward began working in the family's cafe, The Mayfayre, in the High Street, and invested his demob pay to create a small ice cream factory in the back.

Their businesses expanded, and they bought the shop next door, and, over the years, several buildings at the rear, off George Street, behind the Commodore Cinema. For the first years of married life, Edward and Gloria lived above the shop, only moving to their house, in Northwood Drive, in 1960.

His ice cream became legendary on the Island and across the country, and was to be found in supermarkets up and down the land, including Harrods and Fortnum & Mason. He won countless prizes and prided himself on using the finest natural ingredients at a time when such things were not as commonplace as they are today.

But Edward and Gloria were known for more than their ice cream. Their cafe, restaurant and hotel business opposite Woolworths was a landmark in its heyday, and it's safe to say they were pillars of the community.

They were both civic-minded, and served as independent councillors for decades. Edward became the Deputy Mayor of Ryde Borough Council in 1970, just before the reconfiguring of the local authorities.

He was a governor of many Island schools and, in his role as President of the Island's branch of Save The Children, he hosted a major fundraising event, welcoming the charity's patron, HRH The Princess Anne to Carisbrooke Castle in 1978.

Some of Edward's successes as a councillor are givens now - welcoming the Hovercraft service to Ryde and the rebuilding of the sea defences.

Edward is also a current active member of the Island's Catenians an association for Catholic men.

His service to Ryde over more than 65 years was acknowledged in 2015 when he was made a Freeman of Ryde. Perhaps for his 100th birthday, he will exercise the right conferred by his freeman status to drove sheep up the High Street!

Eddie himself, felt the big day was no different to any other, saying:

"I don't feel any different, really. I exercise the same and I eat the same. I try my best in life and I have the love of my family and friends.

"I think I have been pretty lucky. I lost my father when I was five and felt like I had been orphaned but I got over that and went to on have a full life.

"I have always believed in being kind and being fair and doing the right things at the right time."

No account of Edward's life could fail to mention his family. Gloria, his wife and business partner, was equally known for her contribution to civic life, sitting on the councils for many years, becoming Mayor of Medina in 1980, as well as serving as a magistrate, and Deputy Lieutenant of the Island - efforts which were rewarded in 2007 with an MBE for services to the Island.

They had five children with eldest daughter, Gioia, followed very much in both their footsteps, running the ice cream business over many years, and serving as the Island's High Sheriff in 2019.

Their late son, Anthony, was known internationally for his work as a writer and film director, and never forgot his Island roots. In his acceptance speech at the Oscars in 1997, he held his Oscar aloft and declared it was 'A great day for the Isle of Wight', perhaps to the bemusement of Hollywood!

Anthony was made the first Freeman of the Isle of Wight in 1998. Edana, Loretta, and Dominic are also well-known Islanders who are proud of their heritage. In October this year, Loretta will become the first woman Master of Clare College, Cambridge - returning to the college she attended as an undergraduate after Medina High School in 1982.

Edana is a famous jazz/blues singer and writer while Dominic is a television producer and screen writer.

As well as his children, Edward now has twelve grandchildren and five great grandchildren, and the family will get together for a private party over the weekend. A bigger celebration has been postponed because of the Covid restrictions and it is hoped to be held in the near future.

As he looks back on his life, and particularly as he recalls his own early years of poverty and hunger, Save The Children remains a charity close to Edward's heart. For his birthday, he has set up a Justgiving Page for donations in lieu of gifts: https://www.justgiving.com/fundraising/EdwardMinghella.