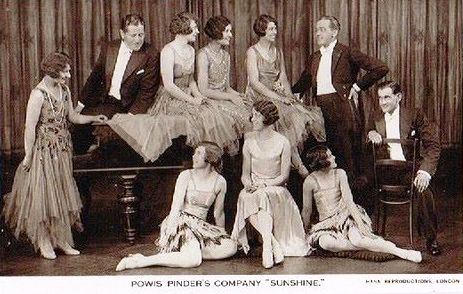 Shanklin Summer Theatre was constructed on the Esplanade in 1921 – opening later that year with the first Sunshine Concert Party, which went from success to even greater success.

Behind the success of the Hidden Summer Theatre was fireman Henry Powis-Pinder and his wife, Ethel. Powis-Pinder was a Leading Fireman of Shanklin’s Auxiliary Fire Service.

When researching the lives of firemen of the past, it’s common to find that their family backgrounds were one of manual labour – typically in construction or agriculture. The life of Henry Powis-Pinder is therefore contradictory to all expectations being as remote from that of the stereotypical fireman as one could imagine. Henry had never served in any fire service until volunteering for the AFS when he was in his 60s, which makes his story quite remarkable. 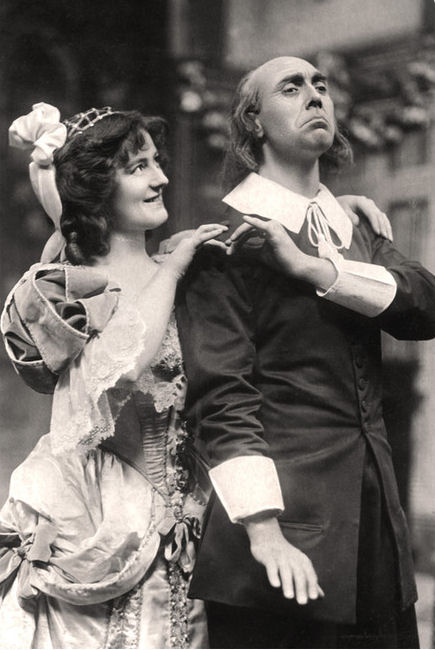 A son of the late Dr Edward Pinder of Camberwell, he devoted his life to theatrical interests and became known far and wide as founder of the famous Sunshine Concert Party, the nursery of many stage, screen and radio celebrities. Henry was born in Camberwell on 6th September 1872 and grew up in the expansive family home in the leafy Grove Lane, London – where the average property sells for in excess of £900k today.

Henry was the possessor of a splendid baritone voice and this with his acting ability brought him early success in his performances of Gilbert & Sullivan operas at the Savoy Theatre London. He scored his biggest success as Colonel Popoff in the ‘Chocolate Soldier’. Other hits in which he appeared included ‘The Earl and the Girl’ and the ‘Talk of the Town’ with Sir Seymour Hicks.

Henry married Ethel Florence Quarry in 1897 and his wife was associated with him when he ventured into theatrical management in 1914. This appears to have been the time at which Henry detached himself from the bright lights of London and was entranced by Shanklin with his first concert party ‘The Burlesques’ which he presented in the Grand Pavilion on Shanklin Pier.

The first printed reference connecting Henry with the Isle of Wight appeared in a County Press article in 1915. Shanklin Town Hall (Theatre) had been the venue for ‘an evening entertainment of singular artistic excellence’ – in aid of the St John Ambulance Association. The crowded performance concluded with a one-act comedy, ‘Jerry and the Sunbeam’ starring Miss Dorothy Gouldsmith and Henry Powis-Pinder. 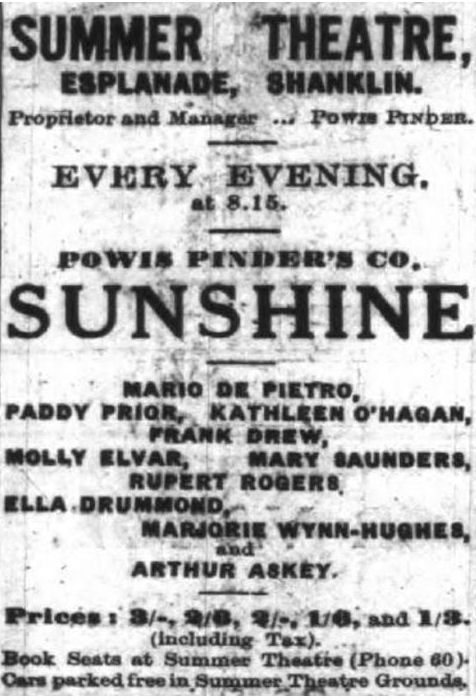 Finding Shanklin a worthy home, the couple embedded themselves in local society with Henry becoming a freemason of the Chine Lodge in 1919. Henry and Ethel’s contributions to Shanklin’s entertainment industry were relentless from there on, eventually establishing the new Summer Theatre, on Shanklin Esplanade in 1921. It was actually a brick-by-brick reconstruction of a former large sea plane hangar sold from the Bembridge Harbour Station. The hangar originally housed WWI Fairey Campania Seaplanes of the Nizam of Hyderabad's RAF Squadron. The Summer Theatre was reconstructed on its new site by construction engineers Messrs Simmonds. The interior was redesigned as a Concert Pavilion that included a platform stage and proscenium arch.

During WWII the theatre was used as storage for the PLUTO project which was a pipe line under the sea, and was later badly damaged. There is no doubt that it has had a large amount of repair work over the last ninety nine years or so. Today the former Summer Theatre is in use as an amusement arcade. 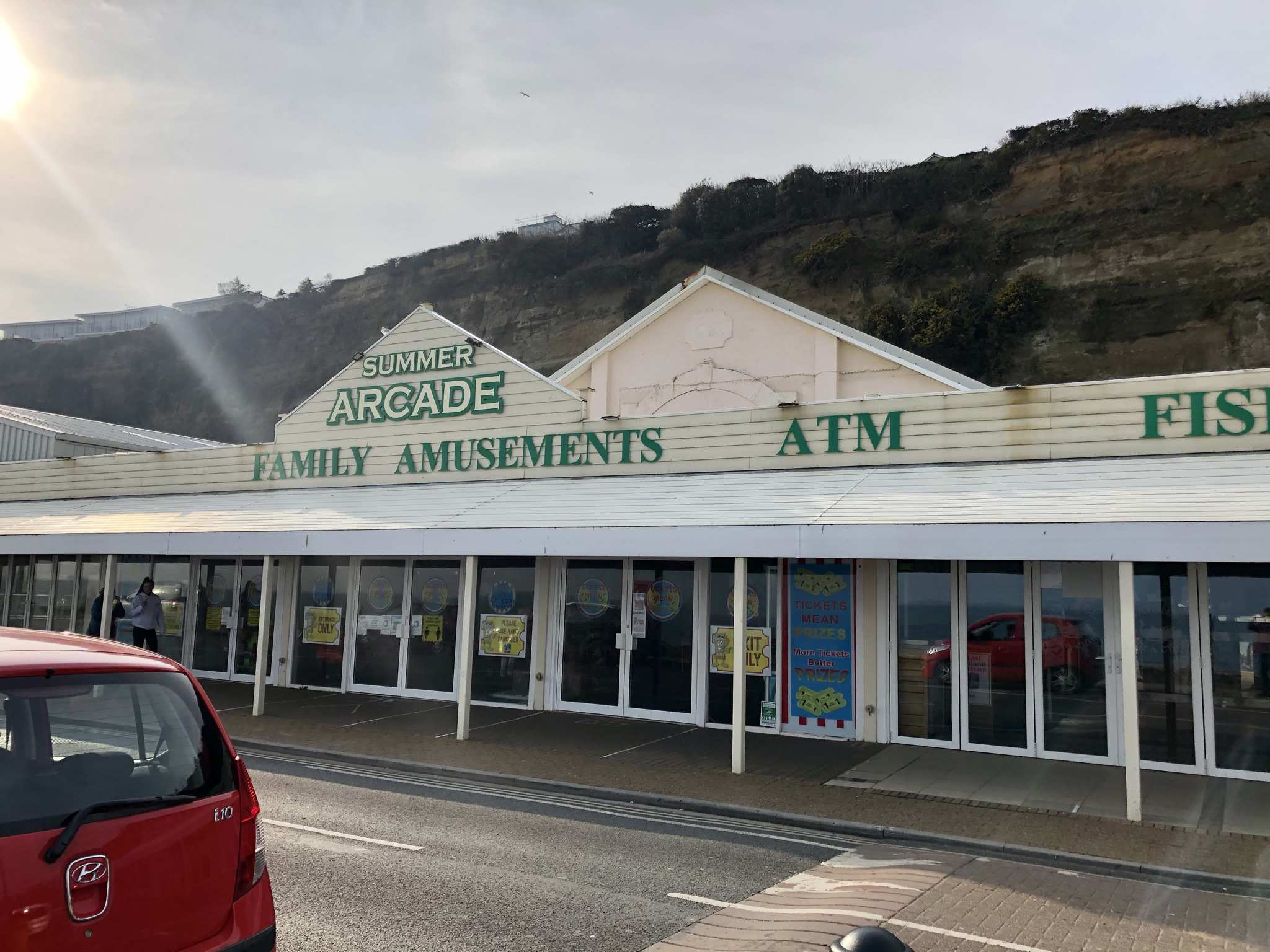 After the reconstruction was completed, the theatre opened in the later part of 1921 with the first Sunshine Concert Party with great success. Henry was also responsible for concert parties at Ventnor. Among artists that he had helped along the road to fame were; Edwin “Teddy" Styles, Arthur Askey, Bernard Lee, Webster Booth, Mario de Pietro and Raymond Newall.

Although Henry was a busy man, he found time for relaxation as a member of the Shanklin Club and on the links of the Shanklin and Sandown Golf Club, of which he was club captain in 1939. In recent years he put his wealth of experience as an old Savoyard at the disposal of the Sandown & Shanklin Operatic Society. It is a striking coincidence in Henry’s acting career that he started on management in 1914 when WWI broke out and finished in 1939 in the year that the WWII began. Through all those twenty five years he had the enthusiastic and sympathetic support of Ethel and for much of the time was assisted by his son Arthur Powis Pinder.

Three days after the declaration of war Henry celebrated his 67th birthday – but his age didn’t prevent him from volunteering to serve with the Auxiliary Fire Service. Henry continued ‘doing his bit’ as a crew leader in the AFS during the war and ironically for the last four months of his life he had been reading the Lessons at the Old Church, Shanklin. Sadly in 1941 his previous good health suddenly failed him, and he was unable to continue his fire fighting duties.

Henry passed away on the 25th July 1941. His funeral was held at St Blasius Church, Shanklin and was attended by a mass of local friends and dignitaries. Also attending were notable friends and admirers of the stage from London. Representatives were also sent from the Brigade and AFS units in Ventnor and Sandown.