Carnival Island: The Story of the New Carnival Company 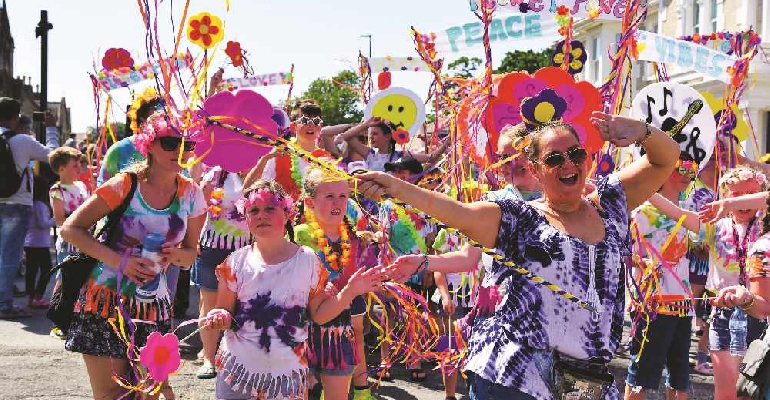 The Isle of Wight has one of the oldest carnival traditions in the UK. Ryde Carnival began in 1888, and chances are you’ve seen or taken part in at least one of the many colourful and uplifting parades that bring our streets to life every year.

Leading the way in UK carnival creativity, innovation, best practice, as well as bringing some spectacular displays of costume, dance and pageantry to our Island communities are Chris Slann and Frankie Goldspink of the New Carnival Company (NCC).
Their professional arts organisation based at The Coaching House in Ryde annually delivers three creative, educational and inspirational local outdoor arts events; All Along the Riverbank, IW Mardi Gras and the upcoming Dark Nights at Brading Roman Villa.
Chris says: “We’re passionate about carnival, and our approach has always been people focused. We work within communities in a very inclusive way. And we train community members, school teachers and other leaders in a wide range of practical skills like lantern and costume making, which they can then incorporate into their own events.”
Chris and Frankie met in Norwich in 1983 and married a few years later. They share a background in street theatre, which established their ongoing belief that people and arts need to own the streets.
Frankie says: “We moved to the IW Council in 2002 for a three year carnival regeneration post. We previously worked in community based arts, then ran Luton International Carnival for 13 years. There we worked with diverse groups in the belief that arts could help racial tensions and bring the community together. It worked and people became proud of carnival. We only planned to move to the Island for the three year post, but fell in love with its people and beautiful landscapes, and now we’re definitely staying.”
At IW Council, as well as developing carnival events, Frankie wrote the first nationally accredited Carnival Learning Programme for adults and young people in the country, but due to council funding cuts, Chris and Frankie moved on to establish the NCC in 2012. Recognised for quality production and sector leadership, its team of five are proud to be one of only 11 carnival organisations in the country that receive annual core funding from Arts Council England for their work.
All Along the Riverbank is NCC’s free community arts and countryside event celebrating May Day on the cycle track between Sandown and Newchurch. Frankie says: “It’s all about getting people into the great outdoors and finding things on their doorstep that they never knew were there. There are benefits to both health, and towards a better understanding of the world in which we live in.”
The IW Mardi Gras is NCC’s flagship event, and more than 1,000 local people took part in 2019. For the last two years, the theme has supported IW Area of Outstanding Natural Beauty’s successful bid for the Island to become a UNESCO global biosphere. Chris says: “The Mardi Gras creates a sense of pride, and 35 local schools and community groups partnered with a local heritage cultural or environmental organisation to learn about their Biosphere Island topic, before creating detailed costumes and puppets to represent many incredible elements that make our Island unique. So much has been achieved through these collaborations and many relationships will continue in the future. Next year’s Mardi Gras on Saturday, June 27th will present ‘The Story of Carnival’.
A new illuminated outdoor parade and pageant, Dark Nights at Brading Roman Villa has been inspired by ancient mythology, local heritage, mosaics and history. The script, led by Island storyteller Sue Bailey, is written by local schools and community groups and a spectacular performance on 16th November will feature dancing, handmade costumes and giant puppets. There are several community workshops leading up to this event to look out for.
For NCC, one of the most important elements of their work is to promote inclusion and diversity. Chris says: “We’re proud to have brought diversity to the Island in terms of costume design, performance and samba, through visiting artists from incredible organisations such as Embaixadores da Alegria from Rio in Brazil and Junkanoo in the Bahamas. We aim to be leaders at including disabled people in all our programmes. Our ongoing Alegria project promotes inclusive and disability-led carnival in the UK through workshops, lectures and has toured nationally and internationally.”
NCC also recognises carnival can be a wasteful art form, often using shiny plastics and foam and wants to deal with those issues too. Chris says: “Next year we’re involved in organising a national conference ‘Towards a Greener Carnival’, looking at how to develop high quality carnival using sustainable materials based on some work we conducted at Mardi Gras this year.”
Frankie and Chris love their job because it’s all about community. Frankie says: “Everything we do is people-centred and we are passionate about working with local communities. Carnival takes people on a journey that improves their confidence, wellbeing, self-esteem and provides new skills. I think we always deliver over and above what people expect, and people are often really surprised at what they and their community can achieve by working together. We understand how being a part of these inclusive events builds people’s confidence and we know it can change lives, we’ve seen it happen.”