Natural Living: The Sparrowhawk on the Isle of Wight 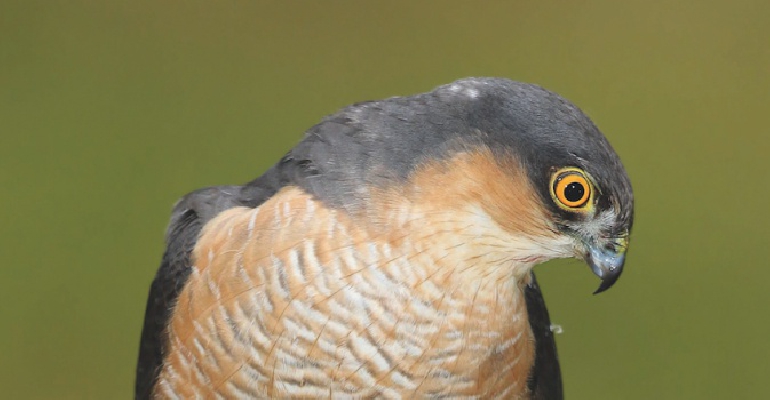 Sparrowhawks are now fairly common throughout the country and more of us can enjoy the breathtaking sight of these spectacular, small birds of prey.

Just woken, I caught sight of fast turning wings just outside the bedroom window; as their owner settled on a nearby branch just a few feet away, I had a clear and unforgettable sight of a male sparrowhawk.

Considerably smaller than his female counterpart, the male weighs just half of her weight and is about a quarter shorter than her; this fellow perched long enough for me to see him in superb detail.

With a grey back and wings and barred orange brown bars on his chest, he held his body still while turning his head, searching the garden for prey.

Even at his size, the male is still capable of bringing down birds large as a thrush; sparrowhawks’ main prey are small birds although they’ve been recorded predating on 120 species, including bats.

I’ve only ever seen a female attack her prey, bringing down a pigeon in the middle of a road, but these birds have a reputation for tenacious hunting.

They are able to follow birds at speed, even through gates, tilting themselves to fit through and often plucking and eating their unfortunate victims while still alive.

They perform a vital role in keeping their prey populations healthy as they weed out the unwary and sick and contrary to popular belief they do not a affect songbird numbers, as their own population only increases with prey numbers.

They hunt by surprise, bursting after their prey and sadly they sometimes fatally crash into windows during pursuit.

Sparrowhawks that return to the same nesting territory in successive years will usually keep the same mate; this must be a relief for the smaller males as the female can and sometimes does kill a courting suitor.

Once paired, the male provides the female with extra food so that she has sufficient fat to lay eggs and most young sparrowhawks will then breed within a few miles of where they were raised.

The male can live until he is seven or eight, but his mate can outlive him by up to four years.

And thankfully, since the banning of DDT pesticide, sparrowhawks are a more common sight.

One of the most mesmerising aspects of the sparrowhawk I noticed were his piercing, bright yellow eyes; he stared right at me once or twice and I could see the small black iris in the centre.

In some older males the eye can turn orange or occasionally red.

His beak too was clear in perfect detail; needle sharp and hooked, it is the ideal killing tool and I can see why songbirds fear this agile hunter, always on the lookout for their presence.