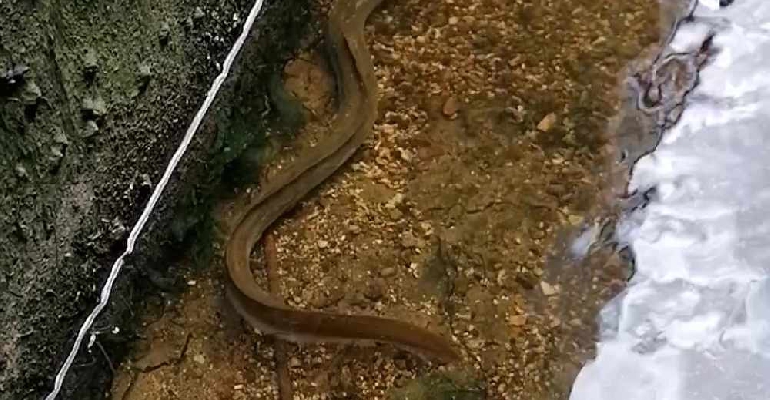 Nurseries containing hundreds of oysters have been placed in the Lymington River as part of BLUE’s initiative to re-introduce the shellfish to the Solent and eventually re-establish self-sustaining populations. These mature ‘broodstock’ oysters will release millions of larvae into the water.

“This is great news,” says Wightlink’s Chief Executive Keith Greenfield. “These oysters are already improving water quality by removing pollutants, just one of them can filter up to 200 litres of water a day. We are delighted to hear this endangered eel has already been spotted and hope our nursery will continue to be a refuge for rare species.”

European eels begin life as eggs at the bottom of the Sargasso Sea in the North Atlantic, then spend a year or two migrating with the ocean current 4,000 miles to Europe, where they seek out freshwater habitats. When mature, the eels return to their birthplace to spawn. Historically, they were caught in the River Thames and enjoyed in eel pies and as jellied eels but their numbers have declined in recent years. This could be due to over fishing, coastal development or pesticides.

Dr Luke Helmer from BLUE says: “This was an exciting discovery and adds to our knowledge of the eel population in our estuaries. We have also found them in the River Itchen and Chichester Harbour, which could mean that these areas are important migratory routes or that the eels reside here for longer periods. We need to know more about this intriguing species and are keen to carry out research into the eel’s complex lifecycle.”