Tour of Britain’s Ryde to The Needles 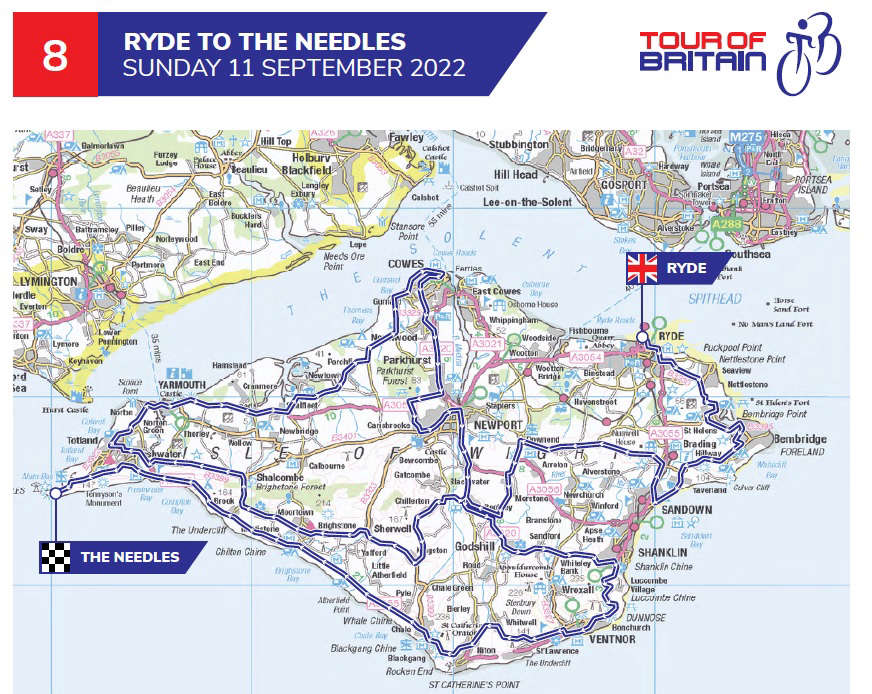 This month the Isle of Wight hosts the final stage of the UK’s most prestigious cycle race, the Tour of Britain.

It will be the first time the iconic race would have been hosted on the Island and one of the largest sporting events to ever be held here.

The Tour of Britain starts in Aberdeenshire on Sunday 4 September and over eight days, 19 of the world’s top teams and 100 pro riders, will work their way down, arriving in Ryde on Sunday September 11.

Stage 8, the final leg of the race, spans 150km and passes through a wide range of the Island’s towns and villages. After starting in Ryde — between 11am-12pm — the race will pass through the main towns and villages of Bembridge, Sandown, Rookley, Shorwell, Mottistone, Freshwater, Yarmouth, Shalfleet, Cowes, Newport, Godshill, Shanklin, Ventnor, Niton to finish at the National Trust’s The Needles Battery around 3.30pm. 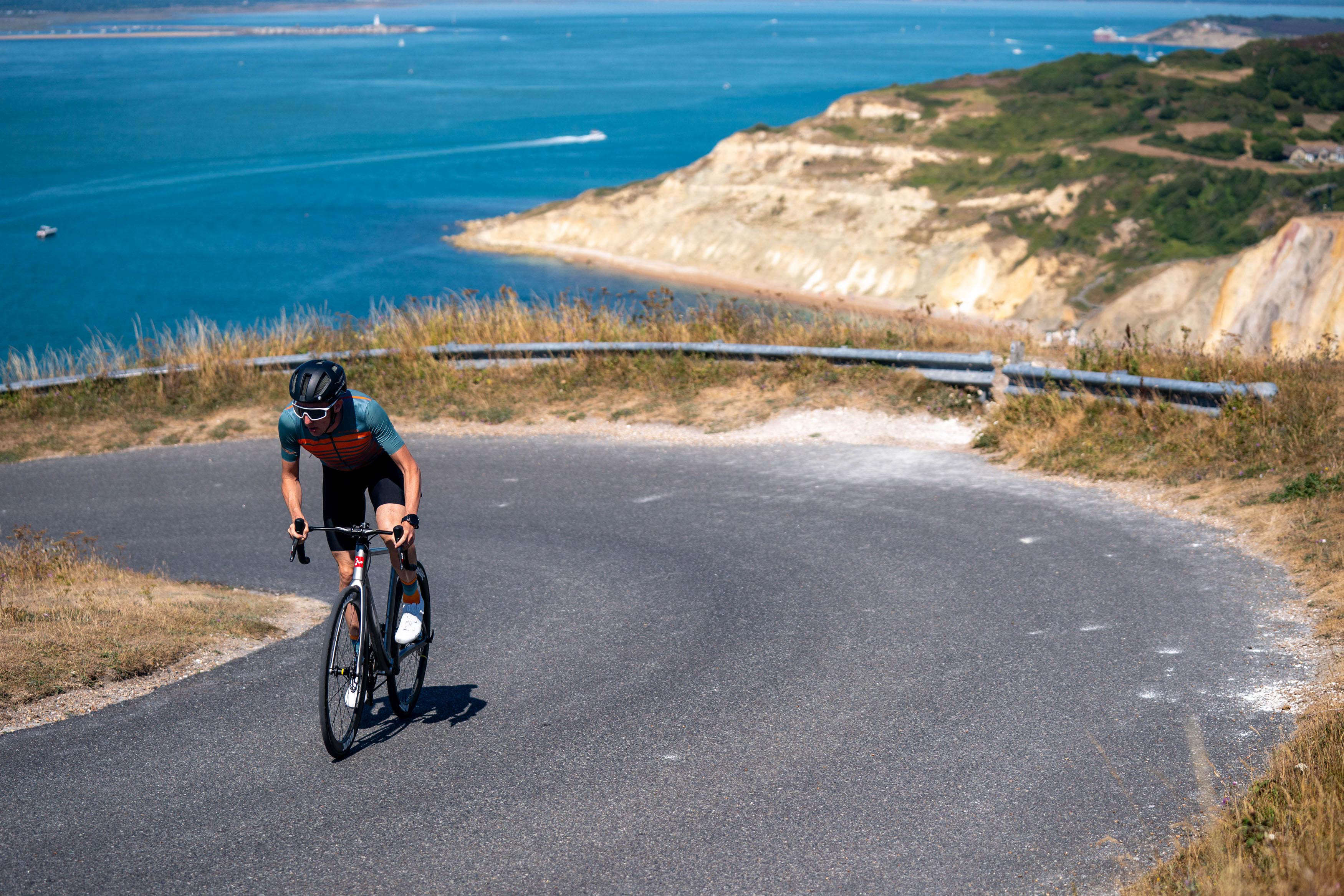 The race will be televised live on ITV4 in the UK and shown in over 150 countries worldwide, via Eurosport and the Global Cycling Network. A one-hour highlights show will also be broadcast each evening.

On the day and in the build-up to the race, Islanders are being encouraged to get involved and help to host an Island-wide festival of cycling, sport, and celebration! There are plenty of ways to show support; from reusing union jack bunting from the Jubilee celebrations or Isle of Wight Day to dressing your property, shop fronts and windows. Or dig out that old bike, decorate it, hang it high – or leave it down low – just make it stand out for the cameras.

Cafes, bars and restaurants could have some fun with a special cycling themed menu.

Last month, Visit IOW and the IW Council also launched an Island-wide Land Art competition. The tradition of creating land art masterpieces along the route has long been the practice at the Tour of Britain, as well as other cycle races around the world including the Tour de France.

Winning entries could collect a £50 Wight Gift card voucher for their efforts, encouraging individuals, businesses, schools, land-owners and communities to create something spectacular for spectators – and the television cameras to look out for whilst they are following the peloton. 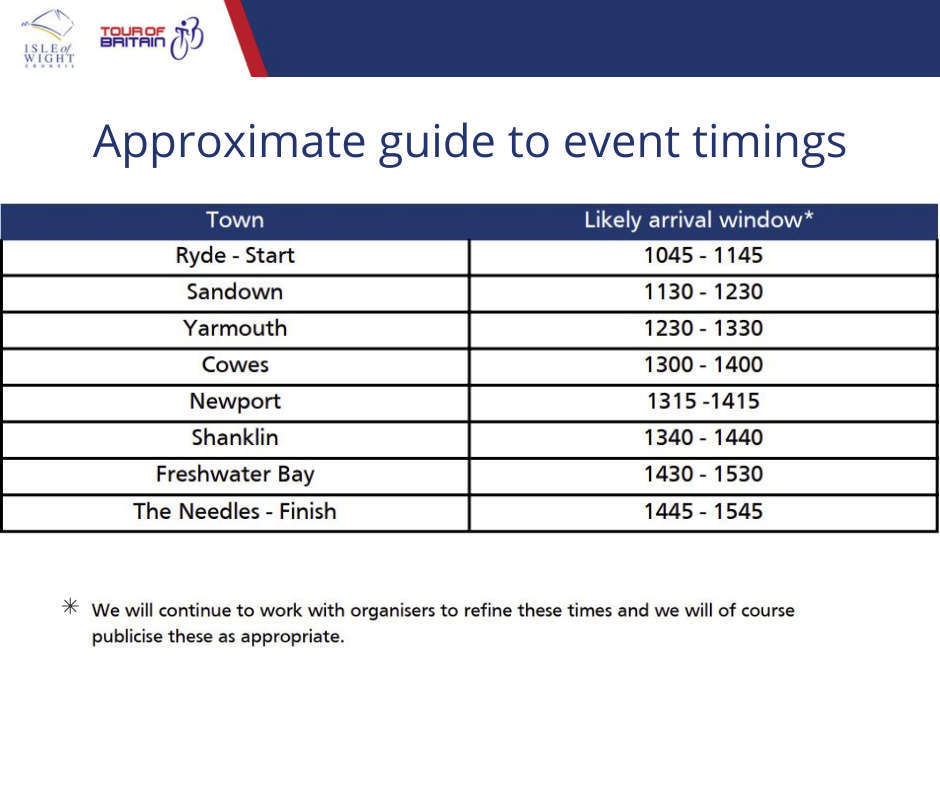 Mountbatten will be the official charity of the final stage of this year’s Tour of Britain, working alongside the tour organisers to maximise opportunities to promote its brand and services over the race weekend and raise the profile of the charity which relies heavily on public support to deliver its services.

Mountbatten joins GKN Aerospace, Wightlink, Red Funnel and South Western Railways as partners of the Tour of Britain Isle of Wight stage, alongside Isle of Wight Council and Visit Isle of Wight.

As part of the traffic management plans for the event, Ryde seafront will be closed for a period as will Military Road at Chale. Organisers say the closures will be in place at the start and finish points on each road.

While the event will be broadcast live to a global audience, thousands of Islanders will also get the chance to see the event on their own doorsteps — quite literally in many cases.

An approximate guide of race timings has been published. It shows the event is expected to start between 11am-11.45am in Ryde.

Riders will then embark on the 150-kilometre route to the Needles.

The estimated timings – which are subject to change – are available via www. iow.gov.uk/Council/OtherServices/Tourof-Britain/Route/.

Now that race organisers have confirmed the start time and also estimates of when the riders will reach race milestones, the council has published details of the rolling road closures that will be in place to facilitate the race.

The rolling road closures – which should last for a maximum period of between 30 minutes and an hour – are explained in a video which can be viewed here www.tourofbritain.co.uk/race/roadclosure/.

Some residents will also be asked to remove their cars from the route so the race can pass safely.

“We are however asking Island residents to play their part in ensuring the course is safe and looks the part for the cameras who will be beaming live pictures of the race – and the Island – across the world.”

In order to reduce traffic on the roads during the race, Islanders are being encouraged to spectate locally if they can. If journeys are necessary then they should, if possible, be timed to avoid the short rolling road closures on the day.

There are two online channels created where residents can find out more about the event. These are via the council website www.iow.gov.uk/tourofbritain and Facebook Tour of Britain Resident Info.

Organisers are promising it will be "the toughest ending" to the Tour of Britain in modern history.

Eighteen of the world’s leading teams, including home fan favourites INEOS Grenadiers, will compete in this year’s Tour of Britain.

They will be one of five UCI WorldTeams who will take the start in the 18th edition on the UK’s most prestigious race, which begins in Aberdeen on Sunday 4 September and culminates with what promises to be a spectacular finale on the Isle of Wight eight stages later.

INEOS Grenadiers will look to go one better than the 2021 Tour, in which young British star Ethan Hayter placed second overall.

While Movistar (lining up for their ninth consecutive participation), Team DSM (who first competed in the race in 2006) and Israel – Premier Tech (third start in as many editions) are regulars at the Tour, BORA – Hansgrohe will return to the race for the first time since 2014.

Three months after their women’s team competed in their first edition of the Women’s Tour, the Tour of Britain’s sister race, Uno-X Pro Cycling Team will make their debut in the UK’s leading men’s cycling event. The event will also welcome the Bingoal Pauwels Sauces WB team from Belgium for the first time.

Having impressed in 2021, most notably when Robin Carpenter became the first American to win a stage of the race, Human Powered Health will return to the Tour in September. They will be joined by Bardiani CSF Faizanè, competing in their 10th edition of the race; Sport Vlaanderen – Baloise, whose involvement with the Tour stretches back to the first modern edition in 2004; and Caja Rural - Seguros RGA, returning for their third start.

The 2022 race starts in Aberdeen city centre and finishes eight days later here on the Isle of Wight. Along the way riders will tackle stages in the Scottish Borders, North East England, North Yorkshire, Nottinghamshire, Gloucestershire and Dorset.

ITV4 will continue to broadcast live flagto-flag coverage of every stage and nightly highlights show, allowing fans in the UK to watch wherever they are. The race will also be shown in over 150 countries worldwide, thanks to the event's partnerships with Eurosport and the Global Cycling Network. 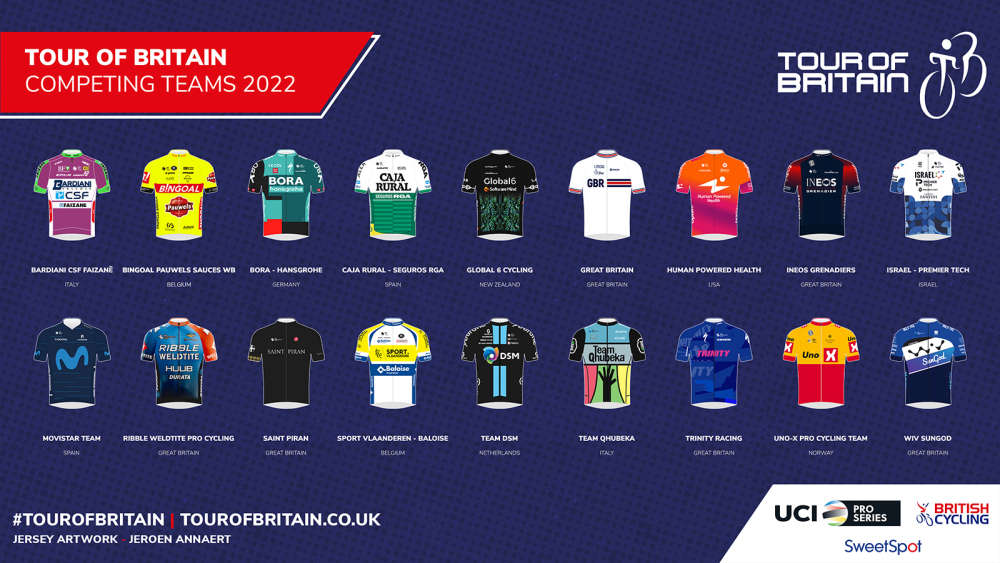