Our Isle of Wight: The Documentary 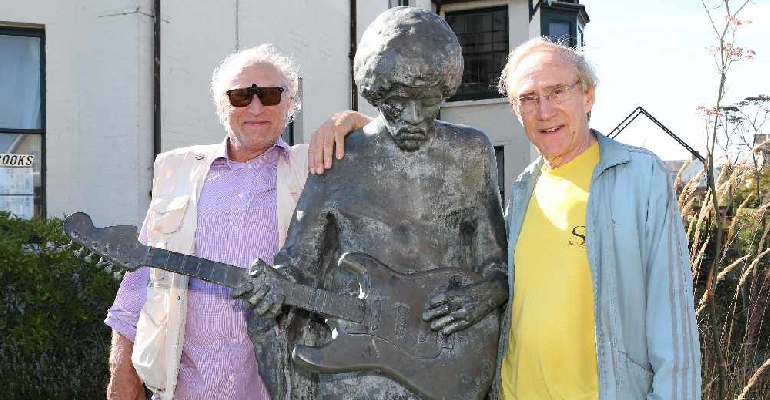 Ray Foulk , organiser of the 1968, 1969 and 1970 Festivals, with Bill Bristow Director/Producer of new Documentary  ‘Our Isle of Wight’ at Dimbola Lodge, with statue of Jimmy Hendrix. Courtesy of www.grahamreading.com

Filmmaker Bill Bristow has teamed up with a wealth of local talent to produce a documentary about the incredible history of the Isle of Wight.

Bill Bristow is a documentary film maker who has worked alongside notable people such as Peter O’Toole, Rutger Hauer, Whoopi Goldberg, Fay Dunaway and Kim Cattrall. He worked as Rutger Hauer’s film double on 1986 thriller The Hitcher and made behind-the-scenes documentaries on other films by Rutger.
Bill’s documentary Who are they?, about a homeless man in LA, received support from Hollywood star, Whoopi Goldberg, film actor Rutger Hauer and HBO and won an award at The Seattle Film Festival in 1986.
Robby Krieger, from The Doors, reached out to Bill to ask if he could provide the music for the Our Isle of Wight documentary. The pair spent time at Robby’s house in Bel Air, Los Angeles, working on the music, which Robby performed on the guitar he used at IW Festival 1970.
The documentary film ‘Our Isle of Wight’ will be narrated by Oscar-winning actor, Jeremy Irons - who grew up in St Helens - and will be directed by Bill Bristow.
The documentary will talk about the many incredible people, inventions and stories that have unfolded as part of the Island’s history. It will uncover everything from the 130 million year old dinosaurs, Marconi’s first radio signals, smugglers, pirates, artists, writers and royals, to the iconic IW Festival and the development of rockets that took the first satellites into space.
Filming began on Our Isle of Wight back in August, with shoots at Shanklin Chine, Cowes Week and other Island locations already underway. Local talent including cameraman Maurice Gilliam, stills photographer Graham Reading, video editor Michael Dangerfield and researcher Jo Macaulay have donated their time to getting the project off the ground.
“I have always developed an interest in various places I have lived and worked in, such as Los Angeles, Spain, Australia, Scotland and Africa,” said Bill. “Out of these places the Isle of Wight is one of the most fascinating as it has such rich and untold stories. I want to tell the world about all the elements that make up the Isle of Wight: the warm people, the amazing inventions, the artists, the writers, the discoveries of ancient boats and pirates. While researching I just keep finding out more.
“Academy award-winning actor Jeremy Irons who was born here, will be helping me, as he will be narrating the film from start to finish.”
Jeremy Irons is known for many prestigious films, including The Man in the Iron Mask, Die Hard with a Vengeance, The French Lieutenant’s Woman and as the voice of Scar in The Lion King. He went to Grantham School at Bembridge and learnt to sail in the waters nearby. Jeremy’s father was one of the founders of Brading Haven Yacht Club.
“Everyone involved in Our Isle of Wight either lives here, or is from here. This is an Isle of Wight production one hundred per cent,” said Bill.
The documentary will delve into some of the Island’s most fascinating pieces of history, including the reason it’s often known as ‘Dinosaur Island’. “I don’t think a day goes by when a fossil isn’t found on the Island, because of the erosion on the coastline,” said Bill. “We will be interviewing Dr Munt at the Dinosaur Museum.”
Stories of pirates camped at Appley Beach, trading exotic spices, plants and monkeys with visiting boats will be uncovered, as well as fascinating stories of the Island’s notorious smuggling past.

Bill will interview people closely linked to the iconic Isle of Wight Festival of 1968-1970, including joint founder Ray Foulke, Bob Dylan’s driver, as well as Julie Felix, who held his hand backstage as he suffered with pre-show nerves. He will also chat to Anne Springman, who lives in the house occupied by The Beatles during the 1969 festival.
The documentary will also tell the story of the Isle of Wight before it separated from the mainland 8,000 years ago, plus there will be stories of ‘Lady of the Isle’ Isabella de Fortibus, who once owned the Isle of Wight and Henry VIII’s whipping boy, who became Captain of the Island.
“I believe freshwater born, Robert Hooke’s discoveries and his understanding of organisms influenced the work of Charles Darwin many years later,” said Bill.
“This was the beginning of my real interest in the Island’s history.”
The documentary will also look at the Island’s iconic sailing history and why the Duke and Dutchess of Cambridge brought out the King’s Cup after 90 years locked away at the Royal Yacht Squadron.
We’ll discover what about the Island inspired artists and authors such as Alfred Tennyson, John Keats and Charles Dickens.
“All these things make the Island so fascinating,” says Bill. “Although a lot of people who live here don’t realise how amazing it really is.”
The project is welcoming investors who would like to buy shares in the documentary, as well as running a Kickstarter to raise vital funds.
The DVD will be sold across the Island, and it’s hoped sections of it will be sold to broadcasters such as Channel 4, the BBC and Netflix.
The DVD will likely be released by summer 2020.
Find out more by getting in touch with Bill Bristow on billbristow1@mac.com.