Dear Reader, I'm looking forward to August and the traditional holiday break. It’s the time of the year, for me, when I meet up with distant friends and family.

It's become almost a family tradition, and I know from my contact with others in my Ryde ‘Ward’ and Royal British Legion colleagues, that it's a similar situation for others. This year we will have something really special to talk about, the reaction and enthusiasm of people for celebrating the Platinum Jubilee for our Queen. It has never ceased to amaze me just how brilliant this was. In addition, we had the celebrations of the Royal British Legion, my presidency of the Boys Brigade and the ‘Forties’ celebration at ‘Havenstreet Steam Train Station’. They were the best I have ever been privileged to be involved in; and I remember previous Jubilees! Havenstreet ‘forties’ week, involving school children from the Island and some from the mainland have grandchildren of my own, so their depth of knowledge about the current conflict in the Ukraine can sometimes be worrying.

The difficulty today is, that they have access to the World Wide internet. My older grandsons link up and talk to other young people in the Ukraine, they are possibly more aware than many of us, the older generation, as to what is really going on in their home territory, what they are suffering, and what they are fighting for.

During the Platinum festivities many organisations and groups held local parties with interesting historical themes and activities. One I went to had organised ‘Your Ration Book’ 1953/54 when rationing in this country finally ended. Inside the ration booklet was written some interesting facts, some unknown to many of us, even us, the war generation. In particular, why Britain diverted much of its imported food from 1945 to 1954 to Europe and the fact that we extended the rationing period in our country in order to send these supplies into Europe. I have often wondered why we were the last country in Europe to end rationing? It made me very proud to tell our young people that because of food shortages in Europe, the problem being gigantic — Holland, Belgium, Germany and Denmark — all occupied by Germany during the war — plus misplaced persons and indigenous persons, of which there were millions, had been reduced to starvation diets by the war. We diverted large quantities of Commonwealth food supplies into Europe.

Another, a different party, displayed food rationing as it was in 1952 with actual samples of food, showing the weekly rationing for one person, plus what, if available, one could buy in addition to what was available on ration. It seemed to me that carrots appeared very high in this category,
because 1951 had a bumper crop. They also made different dishes that could be made using carrots for us to taste, needless to say modern day carrot cake was not amongst them!

At the end of the war we were broke. American money went to restoring Germany, not Britain. So money to rebuild Britain was in short supply. Never the less we went on to build thousands upon thousands of prefabricated houses (known as prefabs). Some of which are still in use today.
The NHS was born, so that all our citizens, rich and poor could have medical treatment and social security. It was ‘thinking outside the box’. It was creative solutions to enormous problems which affected all ordinary working people. Recently it has been proposed that homeless families on the Isle of Wight could be rehoused on the mainland. At the same time the Island is building acre after acre of new homes, supposedly for local people (who can afford them!). In reality a small number of so called affordable houses are on offer, with the majority appearing to be on sale to whoever can afford them. It's time that this council started to ‘think outside the box’ . We need creative, down to earth solutions that don't cost a fortune.

The council needs to identify what British Parliamentary legislation it could use to enforce/provide simple, but affordable, rent wise accommodation, throughout the Island.

We need action now, the Council needs to look at its ‘contingency funds’ and act. Some of the monstrosities that we are building now and which have been approved by our council, are more suited to large cities than a largely rural community. Please Isle of Wight Council, build for our indigenous population and not mainlanders or the mainland retirement community.

On a lighter note: not only was June a fabulous month for the celebration of our Queen's Jubilee, but included various events from the Boys Brigade and the Royal British Legion. We also raised money for the Ukraine, welcomed amongst the first Ukraine refugees to the Island and enjoyed
visits from various dignities, including the Earl and Countess of Wessex; we had a successful Walk the Wight and Ryde Council gave me the ‘Freedom of the Town’. It was unexpected and to be rewarded in this way for a volunteer job that I have carried out for nearly forty years was
‘amazing’. Thank you Ryde for this reward. I, like many others, care deeply about our Island and its inhabitants.

We have seen people come and go, many in positions of trust and authority, using it as a stepping stone for promotion and others things elsewhere. Others, who have been captured by its beauty and magic, stayed and worked hard to ensure that its beauty and heritage are available for generations to come. I've been told, although probably in jest, that I can now walk my sheep through Ryde. My only problem is that I will have to borrow some sheep in order to this. I trust and hope that July will be as busy and profitable as June and that we all have a prosperous tourist season, so that many of our business, who have really suffered over the past two and half years, can get back in their feet. One last plea to our council. Business need help, support and good advice, in the end they employ our local inhabitants and ultimately, council employees. Thank you for reading this, and as usual I welcome your feedback.

Note: The views expressed in councillor columns are personal and do not necessarily represent those of the corresponding town and parish councils or Beacon Magazine 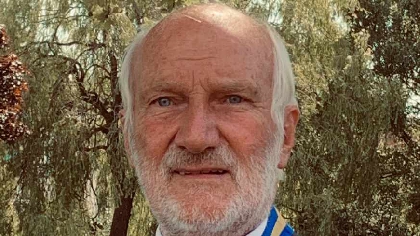