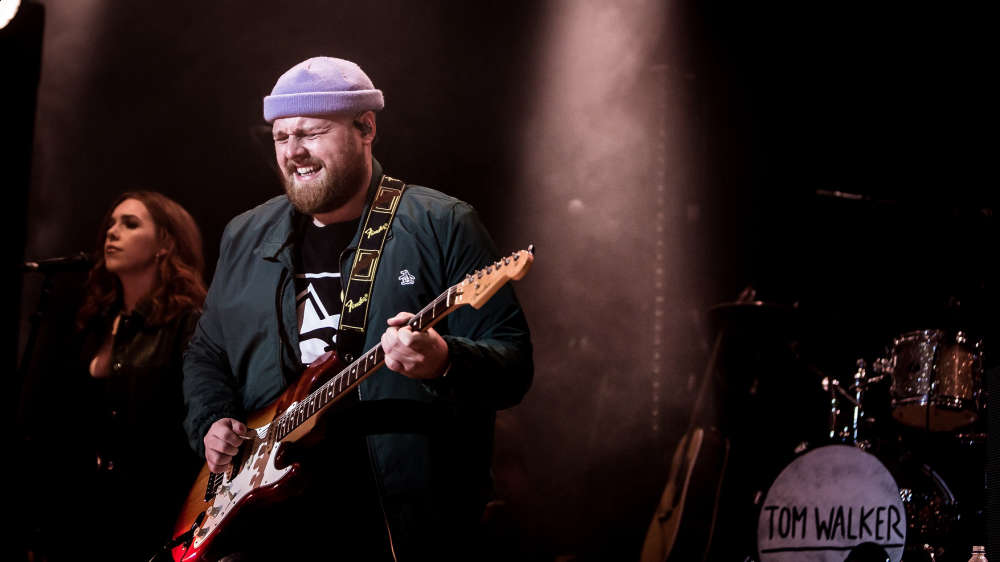 Tom Walker rose to fame following the release of his hugely popular song Leave a Light On in 2018. He’s gone on to write hits such as Just You and I and Wait For You.

Isle of Wight Radio presenter David Francis catches up with Tom, over Zoom.

DAVID: How did you cope with lockdown?

TOM: Well, like everybody, I drank far too much wine got a bit depressed for a bit, it was a real rollercoaster, I'm fine now. And you know, it's nothing real to moan about and a lot of people had some very real stuff to moan about. So yeah, it was, it was an experience that I hope I don't have to do again in my lifetime.

DAVID: It was around about that time that people started to know who you were. So I guess all the PR and stuff was building up and you had plans to go out and do stuff and then you couldn’t really do it.

TOM: I was actually quite lucky because artists had entire full year diaries that were just cancelled at a moment's notice. Where as I had, I think 35 gigs throughout the whole year. And the year before that we'd done 130. So it was a relatively quiet year in comparison, because I've been working on my second album, so, you know, it wasn't ideal. It put a few spanners in the works. It's taken me a lot longer to do this album because obviously it's been hard to get into studios and get out into the world and work with other people. Apart from over Zoom, which you know, writing songs over Zoom is fine doing like an hour meeting or a half an hour meeting on Zoom, but try and be on zoom with somebody for five hours writing a song it's slightly soul destroying, so it's nice to be back in the studio.

TOM: One of the funny things during the lockdown if it's somebody's birthday or whatever, just randomly ordering loads of takeaway to their house. I had a lot of mates who were celebrating their 30th birthday during the lockdown, we tried to make it the best. We had a couple of bits of fried chicken and chips and that.

DAVID: Let's talk about the new record. So how did the recording happen then? Was it over Zoom?

TOM: I wrote, Leave a Light on with an amazing songwriter called Steve Mark. We wrote something beautiful together on our first ever writing Zoom session in the first lockdown and I loved the chorus and the pre-chorus and the kind of bridge but there was something not right about the verses. So I then spent ages doing like 20-28 different versions of the VS and just never managed to hit it on the on the head. So about six months later I heard Masked Wolf's Astronaut in the Ocean I just thought you know what on the off chance, let's just see if we can send it to him and see if he'd be up for jumping on it. And he literally sent back the vocals the very next day after going over how much he loved it and that is the version that you hear on the radio. We didn't change anything that he did, he absolutely nailed it. And then you know a couple months later we finally met in person out in LA to do the music video so it was a bit of a mad one how it all came to be but I guess it was one of the silver linings of the pandemic. I don't think normally UK artists work with songwriters and artists out in Australia because it’s the other side of the world. And then we managed to come together and finish it remotely which I just thought was quite cool.

DAVID: It's got a great sound to it. It does sound very much like it would sit in a Clint Eastwood Western it just it's got that kind of vibe to it.

TOM: Yeah, it’s a bit spooky, a bit Western, just a bit odd. But that's kind of what the song is about. You know, it's about finding something beautiful in the darkness through a really difficult time and and I wanted the music to kind of reflect that and you know, I think we kind of got there in the end after a lot of work in a lot of different versions. I'm really happy with how it turned out.

DAVID: So what are your plans for Christmas?

TOM: Just to go home and see my family is obviously a lot. My family is from Scotland and last year they closed the whole borders. Christmas was cancelled. I couldn't see anybody so I'm so excited this year to just spend some time with my sister on the ground and my mum and my dad. So that's gonna be amazing. And me and my partner are doing Christmas separately this year because last year obviously we did it together so I'm not actually spending Christmas with them because we were both so excited to go back and spend time with our family. I think that was one of the hardest things about that lockdown finally thinking you're going to get to go out for a little minute or catch a beer and catch up with everybody. And at the last minute the rug being pulled from under your feet. I’m so, so excited about Christmas this year, cannot wait for it.

TOM: Yeah, so there'll be a couple of new singles coming out. Plus obviously doing festivals. And the album's coming out. I don't think any of us are certain. That's the bit I'm a bit scared about because you know, musicians and crew and everybody who helps any part of the music industry, we were the first ones to have to leave work and we were the last ones back. So everybody's just like skating around on thin ice hoping that they don't fall through at the moment.