The Ultimate Beach Escapes In The UK And Ireland 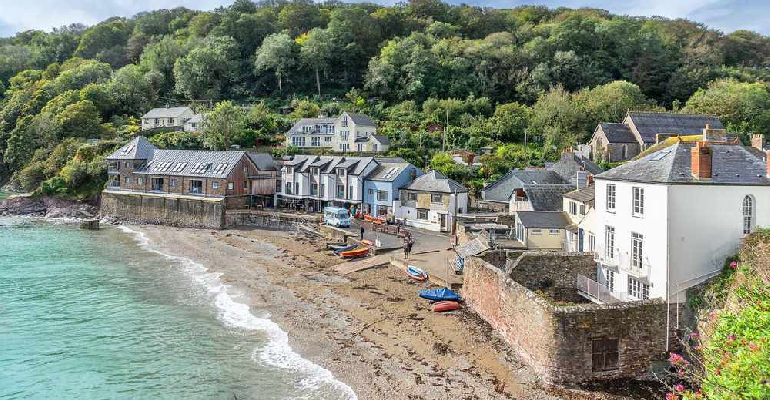 Last summer, when lockdown lifted, there were countless reports of people bunching together on beaches and crowding coves as we all sought to flex our newfound freedom and make the most of the glorious weather.

With most people likely to take a staycation as restrictions ease, there’s a risk it could all happen again.

But search a little harder and there are still many hidden spots to discover along our coastlines; places where it’s possible to sunbathe solo or take a dip soundtracked only by crashing waves.

Below are a few secret shorelines still under the radar, where solitude is (almost) guaranteed.

Undeniably beautiful, Scotland nevertheless divides opinion when it comes to the weather. But Dornoch is an exception; benefitting from its own microclimate, the seaside town is much warmer and evenings are lighter than elsewhere in the country.

Madonna and Guy Ritchie got married here years ago, but despite several claims to fame, the sleepy site is still relatively unknown.

Close to the beach, Links House is a five-star, 15-room hotel, divided into three cottages, a 45-minute drive from Inverness. Built in 1843, it enjoys superb views of the Dornoch Firth, and sits on the famous 516-mile NC500 driving route (a favourite of Jeremy Clarkson and Richard Hammond who stayed whilst filming Top Gear). Four of the leading single malt whisky distilleries are also within a 30 minute drive.

An area of staggering beauty that’s vastly underrated, Northumberland benefits from fantastic scenery both inland and at sea. Even though the coastline is well known, it’s still less popular than some of the UK’s honeypot destinations, and beaches are often refreshingly crowd-free.

Close to Beadnell Bay and its sandy beach, dog-friendly Levante Cottage is a cosy coastal getaway with waterside views. Sleeping up to six, the property features an open fire for cold nights, but the idea is to spend as much time as possible outdoors. After paddling in the surf, visit one of the area’s A-list castles: Bamburgh starred in the Hollywood version of Roald Dahl’s BFG, while Alnwick has doubled for Hogwarts in the Harry Potter films.

How: A week’s stay costs from £112pp (six sharing), plus £20 supplement per dog. Book through Cottages in Northumberland (cottagesinnorthumberland.co.uk).

Nothing sums up a nostalgic summer by the sea better than a beach hut. Decorated in candy box colours, the rows of shore-side properties have entertained British holidaymakers for decades.

While you’ll struggle to snap up a coastal cabin of your own (they sell for eye-watering prices), it’s possible to book a temporary stay at these modern huts in West Sussex.

Find them located on a seven-mile coastal footpath, in a lesser-visited part of the Sussex coast, near the South Downs. Built in 2019, the four self-contained huts belong to The Beachcroft Hotel, where guests can make use of facilities including an indoor heated pool – useful if the English Channel is too chilly.

How: From £297 per night (two sharing). Visit beachcroftbeachhuts.co.uk and englandscoast.com/en.

It’s hard to imagine there’s a stretch of Cornish coastline yet to be discovered. But the Rame Peninsula, often referred to as the county’s ‘forgotten corner’, is supposedly so under the radar, even locals are baffled by its whereabouts. To clarify, it’s in the south east, just across the border from Devon, and is surrounded by three bodies of water: River Lynher, River Tamar and the Plymouth Sound.

Perched on a cliff at Whitsands Bay, Brackenbank Cottage (sleeps five) is a Scandi-styled hideaway, where gulls swoop overhead and dolphins cruise out front.

Further north of Pembrokeshire, and far less busy, the stretch of Cardigan coast between Llangrannog and New Quay is a playground for active pursuits: go hiking, cycling, coasteering, kayaking or surfing. Alternatively, stroll along the shoreline and explore hidden coves. The coastline is dotted with pretty beaches, National Trust sites, and sleepy towns.

Cwmtydu, in Ceredigion, is a small hamlet, where a winding lane connects to a narrow valley dropping into the sea. Very close to the pebble beach, Ty Cwch Beach House is a collection of cabins constructed from stacked shipping containers – available to rent either individually or exclusively for a group of 12. Tables and chairs have been upscaled from wooden crates, and large doors can be rolled right back for a glimpse of sea views.

There’s ample space to store kit, such as kayaks and bikes, which can be rented locally. The owners can also put can guests in touch with qualified instructors, who can design bespoke itineraries.

Set below a medieval cathedral tower dating back to the 12th century, Ardmore in County Waterford has a superb sandy beach. When the sun shines brightly, swirls of turquoise appear, making it look like an exotic escape.

Constructed by the team behind the award-winning Cliff House Hotel, the ultra-modern Cliff Beach House is an exclusive-use luxury rental property a two-minute walk away, which benefits from access to the hotel’s Michelin-starred chefs.

Making the most of its waterside location, all six en-suite bedrooms have vast glass windows framing Atlantic waves. A patio area is available for al fresco dining or a dip in the hot tub; on stormy days, stay indoors and tinkle on a baby grand piano, if you please.