Seven Of The Most Amazing Temples 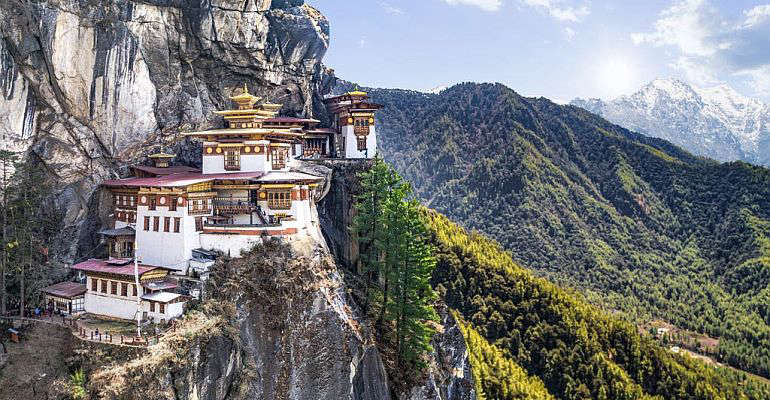 Where there are people, there are usually places of worship.

Temples are typically associated with Asian-origin religions like Buddhism, Sikhism and Hinduism, so it’s no surprise that the continent dominates our list. From the modern metropolises of Japan to the vertiginous valleys of the Himalayas, here are a few of the finest temples anywhere on Earth…

Eye-openingly colourful and quite joyous to behold, the Meenakshi Temple in Tamil Nadu is so bright and vibrant it looks borderline unreal. Of particular note are the 985 pillars spread through the complex, each carved with scenes from the princess Meenakshi’s wedding to Lord Shiva, the Hindu god of destruction. Built and rebuilt several times down the centuries, the current iteration dates from the 16th century, and remains an important site of pilgrimage.

Thailand has a flare for unusual temples (consider the Temple of A Million Bottles, made mostly out of empty bottles of Heineken), but the Wat Rong Khun might just be the most ambitious of them all. An immensely elaborate creation as white as morning snow, the temple was designed and funded by contemporary artist and devout Buddhist Chalermchai Kositpipat, who included images from Superman and The Matrix alongside the usual sea of Buddhas. Started in 1997, the decorations are so staggeringly intricate that work is unlikely to be completed before 2070.

For 3,285 years of age, the twin temples at Abu Simbel still look pretty darn good. Hewn straight from the mountainside by the ancient Egyptians in the 13th century BC, the entrances are flanked by megalithic statues of pharaoh Ramesses II and his paramour Queen Nefertari, which lend the monuments much of their fame. Inside things are only marginally more restrained – a labyrinthine network of side chambers coated with intricate carvings.

Japan is crammed with beautiful temples, and Kyoto is its temple capital, but for sheer splendour it’s hard to match the glittering golden gilding of Kinkakuji. It is contrast that makes the shrine quite so sublime: the rich green of the surrounding pines, the oaky brown of the wood trimmings, the electric blue of the hopefully clear sky all blend together in the reflections of the lake. It’s a delightfully earthy backdrop for a temple that is anything but.

Perched precariously on the wall of the Paro Valley, the Taktsang Monastery is semi-synonymous with the kingdom of Bhutan – of huge spiritual importance to its citizens and on all its postcards. Nicknamed ‘the Tiger’s Nest’, the sites seems like an architectural anomaly, clinging to the cliff face like a lizard. Set high up in the foothills of the Himalayas, reaching the monastery involves a gruelling nine-hour hike from the valley floor, battling both altitude and weather. We don’t even want to contemplate how it was built.

A case study in geometric design, this deceptively simple Ming-era masterpiece consists of three concentric cylinders placed one on top of the other, and was a regular place of prayer for Chinese emperors. A UNESCO World Heritage Site with symbolism oozing from ever tile, the temple still stands resplendent in red, gold and blue thanks to several renovations down the centuries. Surrounded by a large, leafy public park, the temple is as popular with tourists as it is with picnicking families.

Proof, if it was needed, that temples need not be old to be beautiful, the Lotus Temple has been a jewel in Delhi’s crown since its completion in 1986. Architecturally closer to the Sydney Opera House than the ancient shrines for which India is known, the temple resembles – wait for it – a lotus flower, constructed with 27 petals of white marble. Dedicated to the Bahai faith, the temple welcomes all worshippers regardless of religion.