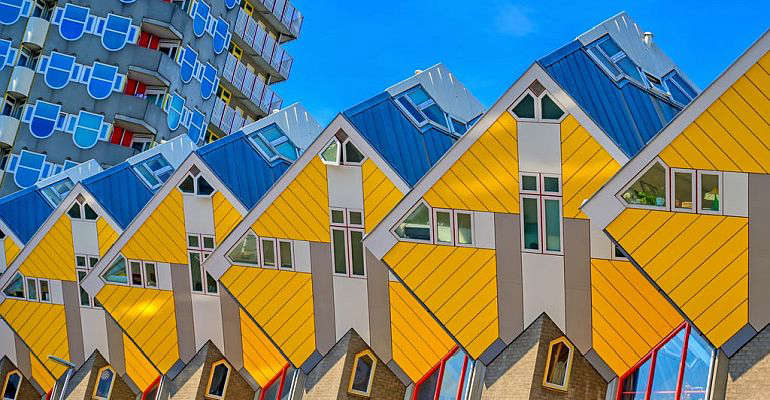 They say truth is stranger than fiction, and when the world’s most imaginative architects are given free reign, the results can be strange indeed. These are some of Earth’s oddest buildings – from a skyscraper the shape of an elephant, to an optical illusion with a Costa on the ground floor…

See if you can guess where the Basket Building gets it’s name? We’ll wait.

Perhaps the ultimate example of so-called ‘mimetic’ architecture, the Basket Building was completed in 1997 to become headquarters for the basket-manufacturing Longaberger Company. Two 75 ton steel arches double as handles, and the alternating windows create the undulating effect of woven wicker.

The project cost $30 million and housed 500 employees, but has lain empty since a restructuring in 2016. Novelty architecture sometimes struggles with resale, and the building remains unclaimed.

Taking pride of place on Sopot’s main shopping strip, the Crooked House looks like a victim of a poorly-executed Photoshop file. Completed in 2004, the warped facade was inspired by Polish fairytale, and is invariably accompanied by a gaggle of photographers and Instagrammers.

Fronting a whopping 4,000 square feet of retail space, this TARDIS-like building hosts shops, restaurants and even a radio station, and most locals have long since stopped noticing its bizarre appearance.

3. Gardens by the Bay – Singapore

Giant mock flowers reaching up to 50 metres into the sky, these so-called ‘Supertrees’ in Singapore were crafted from concrete and steel, and then coated with real vegetation and fluorescent lighting.

There are 18 trees in total, more than enough to place the gardens among the world’s oddest urban areas, and pull in millions of tourists each year.

A three-pronged high rise in ultra-urban Bangkok, the Elephant Building (aka. the Chang Building) might just be the world’s cutest skyscraper, and almost appears crafted from Lego.

Completed in 1997 by an elephant-obsessed real estate mogul, the 32-storey tower contains office space in both legs, and residential blocks through the body. The eyes are two vast circular windows, while the building’s management offices have been painted yellow to make up the tusks.

The structure holds the admittedly-not-very-contested record of largest elephant-shaped structure in the world.

A set of conjoined yellow cubes balancing precariously above the streets of Rotterdam, these geometric homes were architect Piet Blom’s answer when asked to build a living space atop a pedestrianised bridge in the mid-1970s.

Tilted 45 degrees and perched on hexagonal poles, the houses might be nicer to look at than to live in, as the angled walls render around 75% of each interior unusable.