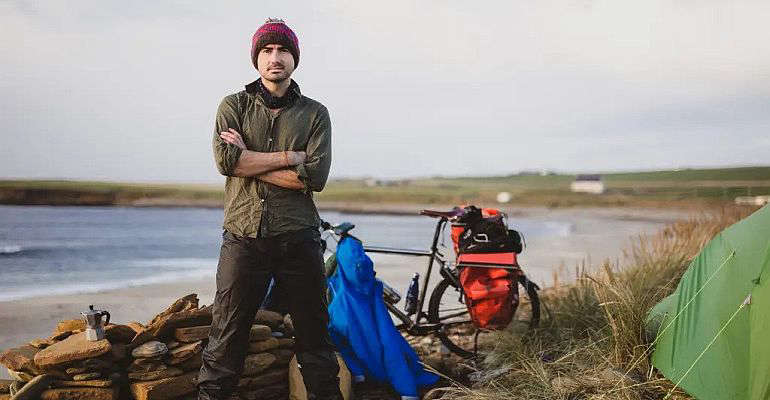 At the start of the pandemic, my life came crashing down. I lost two friends, all my work, and soon I’d used up my life savings. I started to suffer panic attacks that would make me feel like I was suffocating.

In a desperate attempt to make myself feel better, I hatched a plan: to cycle around the country, and to document how people all over Britain were riding out the storm, just like I was.

I passed through 55 counties and cycled 3,427 miles. Now that the country is returning to ‘normal’ these are the five places I’m desperate to get back to.

Difficulty: Intermediate. Lots of rolling hills, but nothing like mainland Scotland.

The first leg of my journey began at the Muckle Flugga lighthouse in Shetland – the northernmost point of Britain – and then I cycled 137 miles south to Sumburgh Head. In autumn, I wild camped under dazzling night skies, almost entirely devoid of light pollution, but soon Shetland will be enjoying 20 hours of daylight. On the summer solstice, it’s possible to read a book outside at midnight.

June and July are the best times to see migratory birds like puffins, golden plovers and Eider ducks, and killer whales can be spotted between April and September.

If wild camping isn’t your thing, then there are plenty of hotels and guesthouses along the route. The St Magnus Bay Hotel (stmagnusbayhotel.co.uk) in Hillswick does a mean Sunday carvery. If you don’t fancy dragging your own bike all the way up there, you can hire one from the Shetland Community Bike Project in Lerwick.

Arguably, Britain’s greatest bike ride, the route starts and ends in Inverness, and most people opt to tackle it in a clockwise direction. Expect lots of climbing – 32,000 feet in total (higher than Everest) – but what goes up must come down. You’ll whizz around alpine switchbacks and into epic glens filled with mirror-calm lochs.

This really is the wildest corner of the country and travelling at the gentle pace of a bicycle will mean you can sneak up on the local wildlife. Keep a lookout for golden eagles, red deer and pine martens.

There are plenty of hotels, guesthouses and campsites along the route. Plockton, Durness and Thurso can be very popular, so have a good look on Google Maps for little places that go under the radar. I would also avoid the school holidays, because the B-roads can get very congested. July and August are also the worst months for midges.

Difficulty: Intermediate. You could do this in a long weekend, but a week would be more fun.

Travel writers wince at the term ‘hidden gem’, but in my opinion, no region of Britain deserves this moniker quite like the northeast of England. Lincolnshire receives some of the fewest tourists in the country, yet its undulating Wolds resemble tidal waves of lush green, punctuated with splodges of fluffy livestock. North of Hull, deserted pebble beaches ramble in to swirling white sand dunes that rustle and hiss in the North Sea breeze.

In Scarborough, the Bike & Boot Inn (bikeandboot.com/scarborough) has recently been refurbished with cyclists in mind; there’s a handy workshop in the basement. Further north, the North York Moors are criss-crossed with walking and cycling trails, and from Danby Beacon, you can see all the way towards Middlesbrough and Hartlepool.

The best bit of the whole ride, however, has to be the Northumberland coast, where you’ll cycle past dozens of medieval castles.

Difficulty: Easy. Take your time and pedal gently from beach to beach.

England’s westernmost isles are almost pancake-flat, making them an ideal place for young families to ride together. St Mary’s Bike Hire (stmarysbikehire.co.uk) in Hugh Town has a good selection of mountain bikes, hybrids, E-bikes and trailers for children, and with the biggest island as your base, you could then spend a day cycling around each of its neighbours: St Agnes, St Martin’s, Tresco and Bryher. All have craggy coves and white sand beaches, and when the Atlantic stirs up a hooley, you can take cover in a pub or tearoom.

Tresco is best for castles and subtropical gardens, while St Agnes is ideal for coastal walking and camping. Troytown Farm (troytown.co.uk) has tent pitches and self-catering cottages, and you can see all the way to the Bishop Rock lighthouse – the last thing between Britain and the Americas.

Brighton to London (the long way round)

Difficulty: Intermediate. Eastbourne and Folkestone are hilly, but the Kent coast is relatively flat.

Head east from London-by-the-sea and ride around the edge of one of Britain’s most historic coastlines. At Hastings you’ll pass the battlefield of 1066 fame, before continuing on towards Dover Castle and then Saint Margaret’s Bay, where you’ll find the South Foreland Lighthouses; a pair of Victorian beacons that warned passing ships of the treacherous Goodwin Sands. On a good day, you can see all the way to France.

The stretch between Deal and Ramsgate feels surprisingly remote; mostly flat, but often buffeted by a stiff North Sea breeze. At Margate, you’ll find a decent cup of coffee, the Turner Contemporary Art Gallery and one of Antony Gormley’s cast iron human sculptures. Turning west towards London proper, follow the north Kent coast through Herne Bay and Whitstable, before zigzagging into the capital via Gravesend and Dartford.

Riding Out by Simon Parker is published by Summersdale on April 21. To coincide with the book’s launch, a multimedia presentation of short films, photos and stories will take place in dozens of theatres and festivals all over the UK. For more information, visit simonwparker.co.uk/adventure-travel-book-riding-out